With bold brown eyes, smooth tan skin, and a flawless athletic frame, it is hard not to notice her on the soccer field. Her determination is revealed with every kick of her foot. She is not an average person; Niloufar Ardalan is known as the “Lady Goal” due to her swift moves, talent on the field, and the goals and victories that she has helped win for her team.

Niloufar, an aspiring and courageous young Iranian woman, is a dedicated and talented player for the soccer team “Zob Ahan Banovan.” Despite all the restrictions she has faced in Iran, including the imposed Hijab that she must wear even when she plays sports, she has made it to Iran’s national soccer team, not just as a player, but as a captain.

Playing on the national team is the ultimate dream of any woman who plays soccer. She is quite close and hopes that soon she will live her dream. She is only a few steps away from experiencing the achievement of her lifetime. But there is one stumbling block that prevents her from reaching her life-awaited goal.

Anyway Kevin Williamson at NRO copyedits the New York Times’ latest piece on the murder of a Jewish man by Muslim rockthrowers while effectively highlighting all the bias, passive voice and assorted hedges that we’ve been so saturated with that we have come to ignore it. The whole thing is worth reading, but the Rite of Passage one caught my eye.

Palestinians frequently argue that rocks and crude incendiary devices are among their only weapons to press for independence, and to defend themselves against Israeli forces during confrontations. For some young Palestinians in areas where there are frequent tensions, their use has become a rite of passage.

(At this stage, people who may have once been called a ‘White Supremacist’ might now fairly be called, ‘a white survivalist’)

A senior judge has ruled a child molester was rightly given a tougher than normal sentence because his victims were Asian and so suffered more from his crimes.

But the paedophile took the case to appeal, with his lawyers complaining that his sentence was unfairly inflated and ‘excessive’.

Senior judge Mr Justice Walker has now thrown out those arguments after hearing that the victims’ families feared they would struggle to find future husbands because of the abuse.

The move has been criticised by children’s charity the NSPCC, who insist justice should be blind to the race of victims. 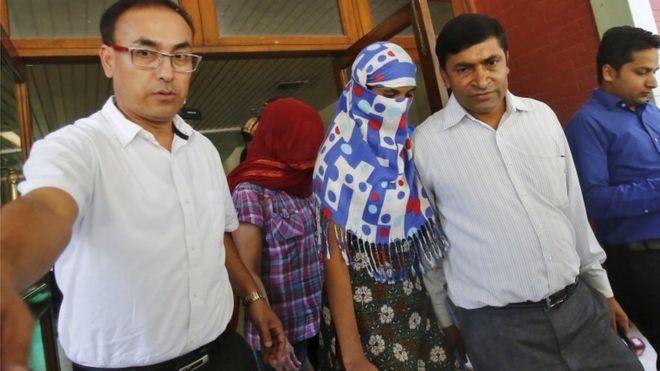 The women, aged 30 and 50, said they were starved and sexually abused by him and other Saudi nationals.

Saudi Arabia denies all the charges and refused to revoke diplomatic immunity for the official, making it impossible for him to be tried in India.

Three women freed from Boko Haram militants are sharing their harrowing stories about their time in captivity. The women, all married to Boko Haram fighters, are part of a group of 128 women returned by the Nigerian military to the Borno state government in northeastern Nigeria.

In a disturbing new revelation, one of the recently freed women told ABC News that many of the Chibok school girls who were abducted in 2013 have become Boko Haram fighters.

According to 21-year-old Tabitha Adamu, she was captured alongside her mother after Boko Haram invaded her village. Her father and brother were killed in the attack, and she was soon separated from her mother.

6. after the fact video of the shooting of the terrorist cop stabber in Germany

Islamists visited Stratford on Saturday to protest against the “racism” of democracy, tell non-Muslims they will burn in hell after death and declare solidarity with Islamic State and Al-Qaeda as their “Muslim brothers”.

About eight males protested throughout the afternoon outside Stratford Station, gathered around a single sign, which read: “Islam is superior #No2DemocracyYes2Islam.”

Abdul Hakim, who refused to disclose which mosque he was from, said the group protests against democracy every two weeks in different boroughs of London.

He said that although the apparently unnamed group does not follow a specific extremist group, its members refuse to condemn Islamic State, Al-Qaeda or the Taliban because they are “Muslim brothers”.

“I wouldn’t condemn them at all,” he said. “As Muslims we believe all non-believers who reject Islam will be in hell fire.

“People who hear the message have no excuse –they will be judged.”

The demonstration, which took place the day after the 14th anniversary of the September 11 attacks on New York, outraged passers-by.

Thank you Richard, Wrath of Khan, Delme, M., And all. More to come.

If I was an alien i think at this point I would pull my spacecraft out of long term storage, wish Earth all the best and set a course for the nearest planet with something like a Club Med.

With any luck Victor or one of the people who film in Ottawa will send video of Stephen tonight in Ottawa and we can have something for you to see in the next day or so, depending on how difficult it is to get the editing done and when I get the files. But hopefully there will be a recording.