1: A video on the Julia Caesar matter by a Swede who is courageous enough to speak plain truth on a public forum. This is a very subversive act for a Swede.

2. This is an audio clip that seems to be about 90 minutes and is in interview with Gen. Paul E. Vallely and a Col. (both retired) from the US forces about Iran, nukes and Israel’s options. Its fairly detailed information and is long but can be put on in the background so its not impossible to get through while doing other things.

(Its a problem for anyone who lets it be a problem. For people who dont want this problem they can do what Hungary is doing such as the story below)

(Hungary managed to lessen the problem for themselves with a clever little trick. Doubt it will work more than a dozen times or so though)

(One can already hear the shrieking propaganda about to come from the other side. But there is a rather profound difference between bringing people to where you need them to be when they themselves came with an agenda which is illegal in all territories, and any sort of historical use of trains for the unwanted like in Turkey against the Armenian Christians etc. Interfering with people who wish to commit a crime is hardly something which should be condemned. But it will be)

(While I sympathize with the view that islam is a mental illness, that is not the intent of the authorities who are actually trying to shield islam from its own teachings by claiming that those who carry out jihad by the sword, one of the 3 options all muslims have for how they are going to wage jihad against the infidel, are sick. Twisted yes, but not sick)

Here is the CBC version of it

(Not the official logo. But it should be)

Klassen is testifying that he also thinks Esseghaier is likely schizophrenic but, unlike Ramshaw, believes Esseghaier understands the nature of his court proceedings and is fit to be sentenced.

Klassen also noted that his assessment had to be conducted without interviewing Esseghaier because the man refused to meet with him. He based his assessment on court documents, interview transcripts and Esseghaier’s previous mental health assessment.
‘You are lying’

An angry Esseghaier vehemently disagreed with Klassen’s opinions Wednesday, spitting at lawyers in court to get the judge’s attention before launching into a loud argument.

“You are lying,” he told Klassen. “Which delusion, which schizophrenia and which mental illness? We are before December 2014, because I am alive. If you say it’s a delusion then the Qur’an is a delusion.”

(A fascinating dichotomy. The political  left, which like islam itself, operates on conclusion based reasoning, insists that jihad is not islamic despite the obvious central pillar of Islam that jihad is in every text. Meanwhile, cases like this and Maj. Nidal Hassan, the Fort Hood shooter, himself a psychiatrist, are both desperate to explain their motives while our governments and officials invent ones for them. It may be time to re-read 1984. Imposing motives to force events to fit a narrative strikes me as every bit as totalitarian as is Islamic ‘jurisprudence’ such as it is. Marxist law. Make the reasoning acceptable so the crime can be viewed properly.)

6. News video on the weapons shipment from Turkey to Libya.

7. BBC clip on muslim who has no passport and wants to join IS.

Abdul Muhid does not have a passport – nor does his wife. He was arrested in September on suspicion of membership of a proscribed organisation, he’s now on bail and had the passports as well as numerous other items confiscated from his home. Abdul has friends who have gone to live under the so-called Islamic State and believes they have every right to. He is unable to leave the country and says his bail conditions are controlling him. His bail conditions initially barred him from propagating Islam and associating with certain people. The interviews were part of a series of reports by Catrin Nye about radicals.

(So when non-Jewish nations need a wall to keep out invading muslims, its suddenly not an “apartheid wall”. And this is why some people, including me, call it antisemitism when people criticize Israel)

Faced with a surge in migration from the Middle East and North Africa, two European countries are exploring the possibility of erecting towering steel security fences along parts of their borders, similar to Israel’s barrier with Egypt.

Hungary and Bulgaria have made preliminary inquiries about buying the Israeli-designed fences, according to an Israeli business source who declined to be named due to the sensitivity of the discussions.

Both EU countries are beefing up their borders to deter migrants, many of them refugees from wars, who are seeking to use them as gateways to richer countries further north and west, particularly Germany.

But moves to throw up such barriers – which could be around 5-6 meters (15-20 feet) high, topped with razor wire and equipped with cameras and motion sensors – would evoke memories of Cold War-era divisions in Europe and exasperate EU officials who say they would not help to solve the crisis.

9. Hundreds turn out to support evangelical preacher appearing in court after he branded Islam ‘satanic’ and ‘heathen’

Hundreds have turned out to support an evangelical preacher who has appeared in court after he branded Islam ‘satanic’ and ‘heathen’.

Pastor James McConnell, 78, from Newtownabbey, Co Antrim, was at Belfast Magistrates’ Court charged over comments he made in a controversial sermon, which was streamed online last year.

The brief hearing had to be accommodated in one of the largest court rooms after scores of people turned up. 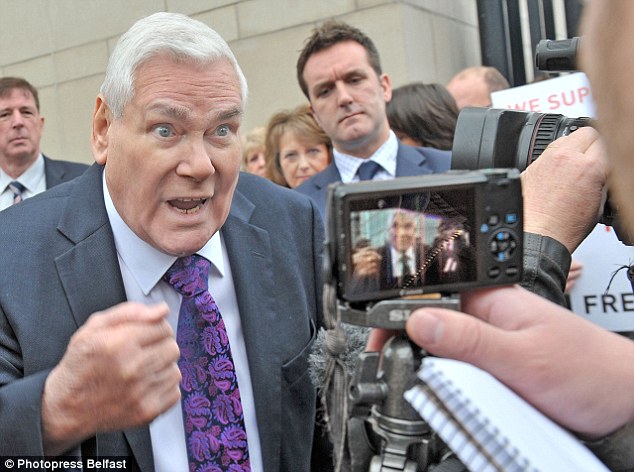 Pastor James McConnell, 78, from Newtownabbey, Co Antrim, was at Belfast Magistrates’ Court charged over comments he made in a controversial sermon, which was streamed online last year

The pensioner, dressed in a dark suit, white shirt and purple tie, did not enter the dock. Instead, he sat in the public gallery beside his wife Margaret, supported by friends and other family members.

Afterwards, amid cheers, applause and hymn singing he told supporters who had filled the court corridor: ‘I believe, for the prosecution, this is a hot potato. They don’t know how to handle it. They are miserable.

(Interesting perspective from the Congolese diplomat)

Thank you M., Wrath of Khan, Tundra T., Buck, Gates of Vienna, and many more who sent in materials.

For those who have not had time to do so yet, I recommend looking over the materials that were posted on Sept. 2, yesterday. There was a lot of significant material that is not available in English media at all, such as the attack on Dan Park and the story of Julia Caesar. Both deserve to be seen and should be noted. Lots of news links as well. And much more to come today.

3 Replies to “Ever unravel a golf ball? Thats how civilization seems to be coming apart these days: Links 1 on Sept. 3 – 2015”