1: Swedish SD canvassers show what a few minutes on the street handing out leaflets for the most popular party in Sweden is like today

On Monday, as many as 126 teachers, schoolgirls and kindergartners were poisoned at the Habibul Mustafa School in Afghanistan’s western Herat province. Herat provincial hospital spokesman Muhammad Rafiq Sherzai revealed some of the victims were vomiting and some were unconscious when they were admitted, but that they were all in stable condition. “A health team has been sent to the area for investigations,” he added. Herat police spokesman Abdul Raouf Ahmadi said police have initiated an investigation, but no arrests have been made at this point. And while no group has claimed responsibility for the incident, the Taliban have a despicable track record of targeting school girls.

2. BBC does another video on Ann Marie Waters calling her a radical for attempting to represent classical British values and British law over sharia and Islamic ones.

3. Screaming passengers threatened to smash windows of Eurostar after being trapped in dark and sweltering carriages for FIVE HOURS after migrants climbed on train roof 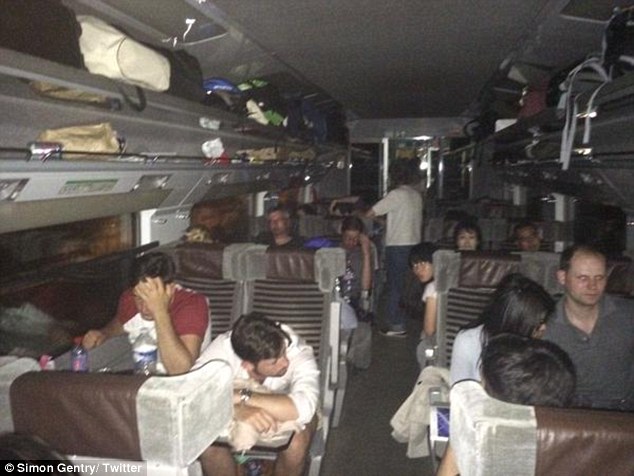 At least four UK-bound trains were delayed for several hours, with two of them sent back to Paris, as police attempted to remove the trespassers from the tops of carriages in Calais.

With no lighting, no air conditioning or no way to communicate with Eurostar staff, conditions on board one of the sweltering trains deteriorated to the point that passengers threatened to smash the windows, the Telegraph reported.

French passenger Frederic Bruel told the newspaper: ‘Little by little the situation deteriorated. The train ended up running out of batteries, so there was no air conditioning, and then after two more hours no more communication as the audio system was out of service. We then spent an unbelievable amount of time in the dark, in an air that was hard to breath.’

4. Denmark to Review Some Naturalization Applications

In a move to further tighten immigration laws, Denmark’s integration minister said Wednesday she wants to review thousands of applications for naturalization from people who had been exempted from the mandatory Danish language test because of war-related traumas.

Integration Minister Inger Stoejberg, an immigration hardliner with the center-right Liberal government, said Danish citizenship is something that “one has to work for” and too many got it “via dispensation.”

5. Iran’s Islamic regime show its culture, its breeding, its wit and dignity in these carefully worded and subtle chants outside the former US embassy in Tehran today.

“Death to America , Death to Britain, Death to Israel”

Thanks to Shabnam A. for the translation.

7. The major fire in France that killed 8 people turns out to have been set by an Algerian Muslim. You will have to google translate this for now, but Ill put it out to the gang and see if someone can do it.

8. Shop Attendant Notices Muslim Acting Fishy, Then He Looks Under Her Hijab

9. Greece: Half a million bullets and 5000 guns found off Crete coast

Five thousand shotguns and approximately 500,000 bullets were discovered by members of the Hellenic Coast Guard in two containers on a cargo ship off the port of Heraklion in Crete, Wednesday.

The cargo ship departed from the port of Iskenderun. TURKEY and was heading to the Libyan city of Misrata. However, the ship was immobilised south of Crete by the Patrol Open Sea Coast after information arrived from the intelligence service on Tuesday. Local authorities discovered two containers containing the weaponry.

(No point sending an army of ‘refugees’ to Europe if they don’t have a decent arsenal I suppose. I mean you can’t expect all those jihadis to just use a pack of matches and their wits like in France yesterday)

Thank you Buck, Liberty DK., M., Gates of Vienna, Wrath of Khan, and many more and much more to come. Its really rather stunning.