More and more citizens of Western nations are making clear statements in defense of their own countries and cultures and doing the jobs they pay (exorbitantly) their alleged representatives to do for them. 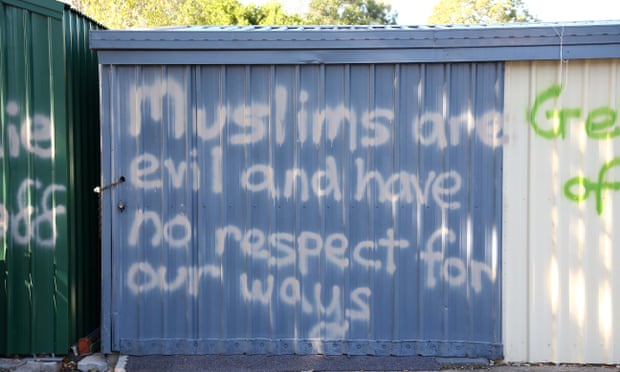 More from Australia. Video from citizen group on why Islam must be fought and not accepted. Daily Mail

Also this article on same people and issue

2. Is Islam a Criminal Enterprise, & Should American Mosques Be Shuttered?

Hitler’s National Socialist ideology—fascism—put the state in control of every aspect of human life, but calling it a religion would never have made it so.  Muslims know that Islam—an ancient version of fascism often labeled “Islamo-fascism”—is more than just a religion; it is a complete way of life.  It is an ideology that uses religion as a beard.  (The term “beard” originally referred to any entity acting on behalf of another, to conceal the other’s true identity; it is here used to indicate how Islam conceals its true nature and genuine goals by wearing the “beard” of religious license.)

3. Both German and French leaders make ambiguous statements about their intentions to deal with the problems we see with muslims in their respective nations. The problem is, that they seem to be planning to act against native citizens, indigenous people of Europe in order to preserve the security and rights of those who invade and do violence to overthrow our basic cultures and rights.

“As we have seen disturbing pictures from Heidenau in Sachsen, I want to repeat that I condemn the violent riots there. The atmosphere there was aggressive and xenophobic, which is not in the least acceptable. It is disgusting how right-wing extremists and neo-nazis try to spread dull messages of hate. But it is as shameful to see citizens, even families with children among them, support these things. Therefore I can only repeat that Germany is a country, which respects the dignity of every human – this is in our constitution and applies for everyone residing in our country.”

In Milan, uninvited North Africans appear to have blocked the streets demanding pizza and burgers as they do not like the food they are being served.

(Article in Italian with video send to translator)

The Italian navy rescued 3,000 “migrants” aboard more than a dozen boats in the Mediterranean on Saturday. Like hundreds of thousands of others before them, they were taken to Europe for de facto permanent settlement. At the same time, any semblance of border control along the southeastern land route has collapsed. Thousands of migrants stormed across Macedonia’s border also on Saturday, overwhelming security forces who threw stun grenades and used batons in a futile bid to stem their flow. So much for Macedonia declaring a state of emergency on August 20 and announcing that it was sealing its borders.

In July over 50,000 persons from the Middle East and Afghanistan are estimated to have reached Greece’s extended coastline by boat from Turkey. The Turks have done nothing to impede their initial entry from Syria and Iraq, followed by a long transit across Anatolia and departure by sea. The Greeks have been chartering ships to take them from the inundated Aegean islands to Salonika, and facilitated their transit further north.

7. This clip of a muslim community leader is simply adjective defying. But I would like to point out as a refutation to just one of the steady stream of inanities in it, that communism quite specifically denied Darwin. In fact they would send you to the gulags for reeducation as survival of the fittest was most definitely a capitalist idea in communist ideology and they forced scientists to use their version of conclusion based reasoning called Lysenkoism, developed by an idiot named Lysenko. So this imam’s insistence that Darwin is communist is as pencil-up-the-nose crazy as his instance that flies worship allah.

Although frankly, a case could be made for that. That buzzing does sound a lot like what comes from a mosque loud speaker.

In a May 31 address at a Sudanese university, Sheikh Muzammil Faqiri warned students against the alleged conspiracies of local Communists who try to lure Muslims into participating in their meetings, in order to persuade them to accept Darwinism. “Eventually, you deny the existence of Allah and say that your father was an ape,” warned Sheikh Faqiri.

Thank you M., Richard, Gates of Vienna, Buck, ML., and many more and more to come.

5 Replies to “Some western peoples seem to be unhappy with Islam, imams make odd claims and is islam criminal? Links 2 on Aug. 14 – 2014”