(Islam. The religion of two words over and bloody over again)

2. Major explosion in Chinese city of 7.5 million with hundreds injured and many likely killed.

3. The Glazov Gang – Victim of Muslim Grooming/Rape Gangs Speaks Out.

5. In Latvia, a monument to illegal immigrants was erected. Meanwhile, in Prague, a much more accurate statue was erected as a reference to the culture of the vast majority of the illegals 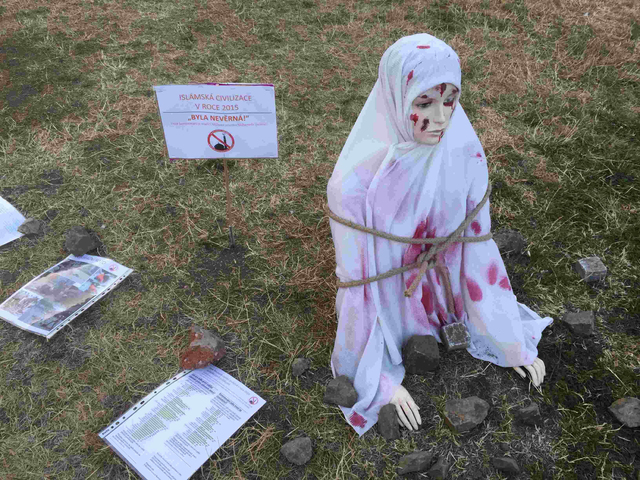 Prague – The followers of the We Do Not Want Islam in the Czech Republic and the Bloc Against Islam groups this morning installed the torsos of the women stoned to death in order to warn of the danger of Islam, Prague police spokesman Tomas Hulan has told journalists.

6. senior Anglican church leader blames the Christians in Nigeria for hampering the fight against Boko Haram by consistently noticing and reacting to the actual facts of their murders. (Not the original headline)

Christian leaders in Nigeria undermined efforts to combat the threat of Boko Haram by failing to engage in dialogue with Muslims, a senior Anglican church leader has told the BBC.

Archbishop Josiah Idowu-Fearon, who is Nigerian, said Christians had feared the country was being “Islamised”.

They had believed Muslims leaders were supporting the militants, he said.

Boko Haram had targeted both Muslims and Christians in its bid to impose Islamic law in northern Nigeria.

Thank you M., Richard, WTD, Wrath of Khan and all who sent in materials.

Here is a comment from a Jewish Swede that is very sad to read. The reality of what we all have created in the world today when we allowed reason to die and genuine equality before the law to be replaced with identity politics masquerading as ‘anti-racism’ is sinking in to some as the consequences of these policies become lethally inescapable. Many will prefer to stick to their illusions even unto death as we saw before in Germany and Poland etc. But some are waking up and making changes.

4 Replies to “Maybe its time to create a sharia clock. Like the doomsday clock but to the end of reason and civilization: Links 3 on Aug 12 – 2015”