1. Dark side of the loon

2. Massive attack in Nigeria where HUNDREDS were killed at Churches and mosques considered apostate or ‘murtadeen‘ (not really muslim)

3. Are Chinese official warnings something to be more concerned about than an Obama ‘red line’?

4. US propaganda video on alleged gains against the Islamic State by US forces

(This identical story pops up every month or so from different authoritative sources. But it needs to be reported every time till someone actually does something about it)

The European Union’s top prosecutor says she has been told that Islamic State terrorists are being smuggled across the Mediterranean hidden among migrants.

Michele Coninsx, head of the EU’s judicial co-operation agency Eurojust, has confirmed she received the intelligence as part of the organisation’s efforts to respond to illegal immigration, terrorism and cybercrime.

Ms Coninsx said Eurojust’s co-ordination efforts are ongoing and she could not divulge what EU nations have told the agency. 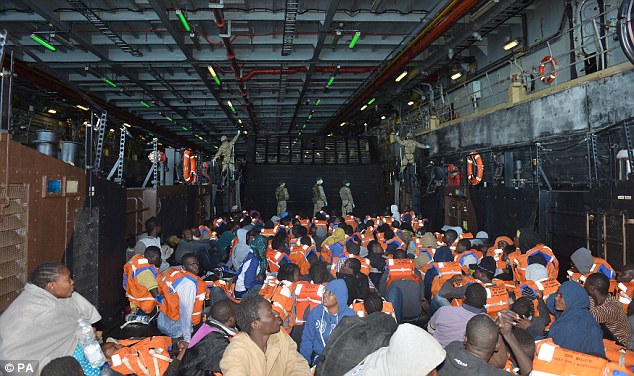 6. Tied to a bed, injected with morphine to stay ‘silent’ and beaten so badly she couldn’t walk for two months: Two Yazidi sex slaves relive the unspeakable cruelty they suffered at hands of ISIS fighters

Two Yazidi women have told of the unimaginable cruelty they suffered at the hands of ISIS fighters who kept them as their sex slaves after raiding their homes in Iraq.

One, a 19-year-old mother, says she allowed her first captor who ‘bought her’ to rape her ‘whenever he wanted’ because he would beat her one-year-old baby son if she resisted. Her son was the only thing stopping her from taking her own life. Her second jailer raped an elderly mother and her daughter.

The second woman, 25, was sold again and again to a string of cruel fanatics who tied her to the bed and drugged her with morphine to keep her ‘silent’. She was beaten so badly that she could not walk for two months.

From the relative safety of the Khanke refugee camp in Iraq, they revealed to MailOnline the gruesome reality of being an ISIS prisoner – and the remarkable stories of how they escaped.

Slavery: The United Nations has said the ‘prettiest’ Yazidi girls captured by ISIS (file photo) are sent to twisted auctions where they are stripped naked and sold to the highest bidder

French authorities are investigating the theft of roughly 200 detonators plus grenades and plastic explosives from a military site in southeastern France, officials said Tuesday.

The thefts at the Miramas site, which is operated by a combination of military services west of Marseille, appeared to have occurred overnight from Sunday to Monday. The break-in comes as France has strengthened its security measures after two deadly attacks by extremists this year.

9. Iran’s Supreme Leader orders country to step up weapons production
(I wonder if Roger Waters has anything to sing about that?)

As Iran negotiates for a nuclear treaty which by all reports will allow it to maintain its nuclear weapons, the Supreme Leader is ordering the country’s leaders to escalate it’s conventional weapons program.

The directives were part of a letter sent to President Hassan Rouhani outlining the “general policies of the Sixth National Development Plan.”

In the letter, the Leader underlined the need to upgrade Iran’s deterrence power by developing the nation’s missile capability and defense technologies as well as boosting the capacity to produce weaponry and major defense equipment to help counter “different types of threats.”

Thank you Wrath of Khan, M., Richard, Maria J., DaffersD.,  Richard and all who sent in material.

For those who read this, and similar sites on a regular basis, it becomes difficult to believe that the average person in our own communities is fully unaware of the facts taking place around the world today. Perhaps people being unaware of the threat-doctrine nature of islam is somewhat forgivable, but the actions of islamic groups around the world to perpetrate horror, death, manifest destiny, islamic supremacy, slavery and pornographic horror against captives is not. The question is who do we blame of course and that has a wide swath of the guilty. Individuals for not looking at alternative news? Perhaps although that may just be more revealing of the nature of humanity with a need to trust in authority.

But certainly the authority which regulates media to misinform the public and most certainly the media which obeys it in perfect opposition to the mandate the people have given it.

6 Replies to “Hundreds killed, thousands enslaved, raped and tortured, the most brutal law enforced, and thats just today so far: Links 1 on July 7 – 2015”