1. RT video on attack in France

2. Here is more from the SUN on the man who seems to be a muslim, who murdered a man who was trying to recover a stolen cell phone which the muslim had in his possession, who subsequently:

Wednesday afternoon, patrol officers in Ottawa’s Lowertown area had contact with a man they say tried to run down two bike cops near the intersection of Rideau St. and King Edward Ave. at approximately 4 p.m.

One officer was struck and suffered minor injuries. A police cruiser began a pursuit of the vehicle, which was abandoned on Wiggins Private in the Sandy Hill neighbourhood. Cops apprehended the vehicle’s passenger, but the suspect driver remained at large.

A search by patrol officers and a police dog weren’t able to locate the fleeing driver.

He was seen going into the water near Strathcona Park and trying to swim across the river.

3. Russia has rehearsed an invasion of SCANDINAVIA which, if carried out, would prevent NATO from reinforcing the Baltic states, claims US security report

(A dress rehearsal for a catastrophe?)

A mock invasion of Sweden and Norway has been carried out by 33,000 Russian troops, a US security think tank has claimed.

Tens of thousands of soldiers rehearsed a military takeover of Swedish and Norwegian territory near the Baltic Sea in March, security expert Edward Lucas said in a report for the US-based Center for European Policy Analysis (CEPA).

The exercise also simulated the invasion of other areas including the Danish island of Bornholm, Finland’s Swedish-speaking Åland islands, and northern Norway, according to the report, The Coming Storm. 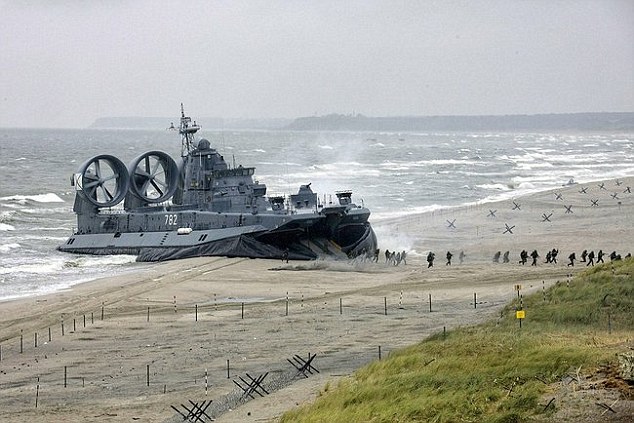 An Islamic court has sentenced nine people to death for insulting the Prophet Muhammad in the northern Nigerian city of Kano.

The accused, who were all Muslims, had pleaded guilty, the head of Kano’s religious police, Aminu Ibrahim Daurawa, told the BBC.

The trial was speedily done in secret after a section of the court was burnt down by angry protesters last month.

(I guess the BBC is officially islamic now as they insist on referring to the founder of islam and its avatar as, “The Prophet Mohamed” which is neither accurate nor necessary for non believers.)

(So to be clear, a teacher in Ontario is under criminal investigation by the police, because he finds something which should be offensive to every liberal, offensive and said so nicely. However no muslims are under investigation for offending all of us who find that face cover offensive or the doctrine that the face cloth is an unabashed uniform for. In fact, if one was to strip away the veneer of religion from islam, the stuff they preach and teach in mosques would never be allowed in Canada, rightly or wrongly)

TORONTO – A Richmond Hill, Ont., teacher is being investigated for a series of alleged tweets with Islamophobic themes, the York Region District School Board confirmed.

A now-deleted Twitter account used a photo that appears to be of a teacher at a Richmond Hill high school.

The school board said it was made aware of the tweets Thursday and the teacher was told about the investigation, which is also looking into whether the account was hacked by an impersonator.

Licinio Miguelo, a board spokesperson, said impersonations on social media are rare but they have happened.

(Neither this article nor the one on the SUN seem to offer comments. How very interesting, not to mention consistent with the fascist policies being made by groups like the OSCE and the Union of Journalists and other journalist Alinsky modeled orgs.)

At least 25 worshippers have been killed today after an Islamic State suicide bomber struck at a packed Kuwaiti mosque after Friday prayers.

Shocking photos show dozens of dead and wounded Muslims who were all observing the holy month of Ramadan in the Al-Imam al-Sadeq Shiite mosque in Kuwait City.

Witnesses said worshippers were standing shoulder-to-shoulder in group prayer when the bomb ripped through the building.