(Rational laws have become somewhat of a rarity. It is so obvious that jihadis should not be allowed to return to Western lands, yet nearly no Western country prevents it. Australia seems to have a survival instinct. They had better watch their backs, not from islam, but the US etc.)

The government said it wanted to ensure that militants with dual nationality who were fighting overseas could not return to Australia.

The laws would also strip citizenship from dual nationals who engaged in terrorism inside Australia.

The government said changes to the Australian Citizenship Act would be introduced to parliament on Wednesday.

The new laws could be applied to up to half of the 120 Australians fighting in the Middle East with Islamic State (IS), said Prime Minister Tony Abbott.

(There is more to Hungary than the Nazi party, Jobic. The current leader seems to have a rational streak as well as Australia. How will the EU deal with that?)

Hungary on Tuesday suspended European Union asylum rules requiring it to take back refugees who have traveled through Hungary to other countries, and Brussels immediately called on it to clarify its action.

The asylum rules, known as the Dublin Regulation, were first drafted in the early 1990s. They require people seeking refuge to do so in the European country where they first set foot.

So far this year, more than 60,000 immigrants have crossed into Hungary illegally, the government said.

The European Commission called on Hungary to explain immediately why it had stopped taking back asylum seekers from other states in defiance of EU rules.

(ABC has subsequently admitted it made a mistake)

ZAKY Mallah, the first Australian charged under Howard-era anti-terror laws, says he stands by the comments he made on the ABC’s Q&A program last night adding the federal government’s counterterrorism agenda was pushing more disaffected Muslims into extremism.

Mallah, who was acquitted of the charges but spent two years in Goulburn’s supermax prison awaiting trial, made the comment in response to the backlash over his controversial appearance on the ABC’s Q&A program last night.

His fiery exchange with Parliamentary Secretary for Foreign Affairs and Trade Steve Ciobo, and controversial comments on the show led Prime Minister Tony Abbott to call for a government-wide boycott of the ABC program, accusing it of betraying Australians.

In an opinion piece written for The Guardian, Mallah says Mr Ciobo’s comments on the program played into the hands of the Islamic State by creating more of a gap between isolated young Muslims and the government.

4. Here is the GoV post on the video we made about the Australian captain of Taqiyya

6. Here is a sticker a roving Ottawa photog saw on a truck he thought was worth sending in. (Thank you Victor Laszlo) 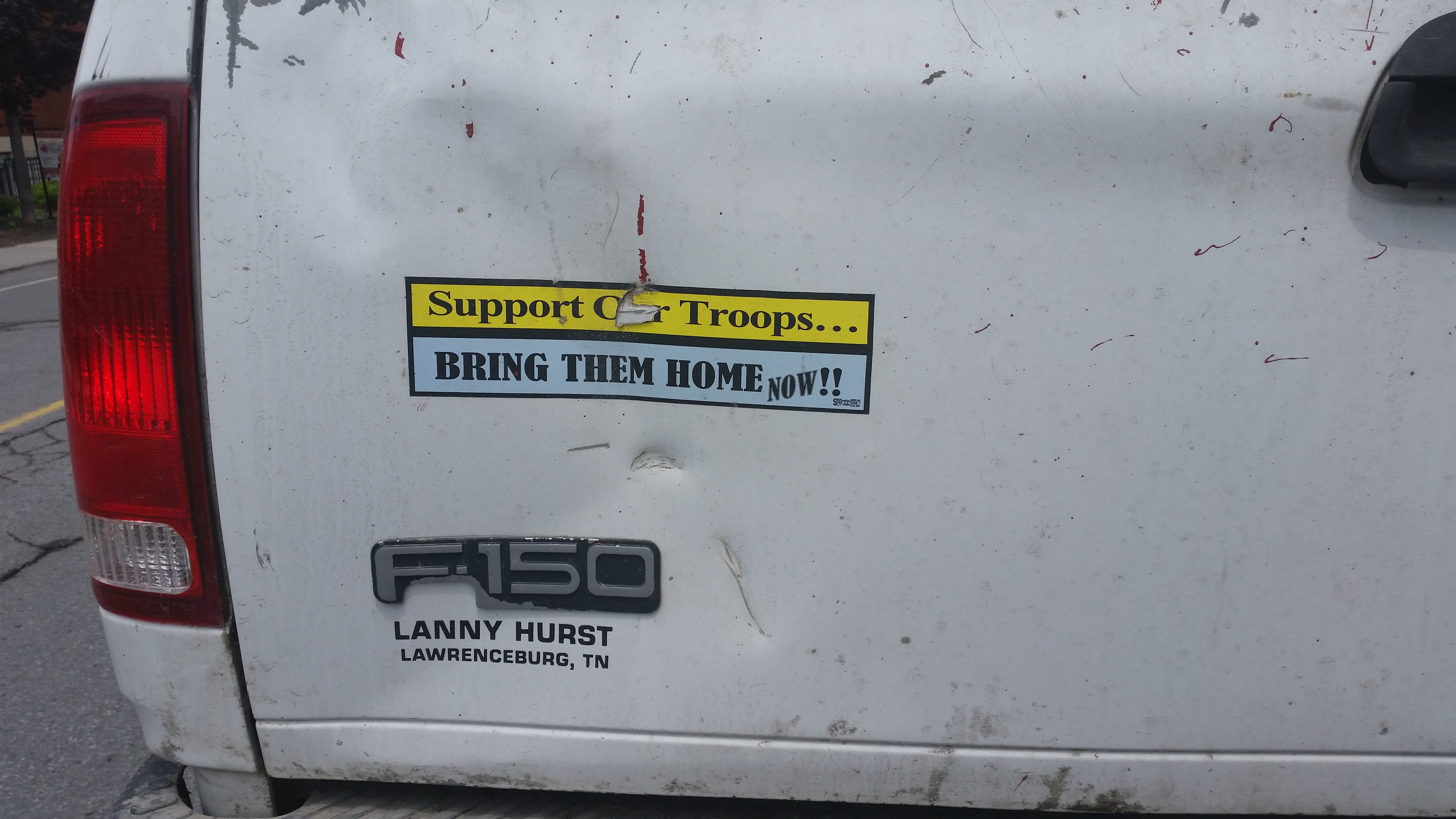 A few things needed to be added to this though:

Support your firemen. Never let them leave the station. (unless its on fire)

Support your medical staff. Never let them near sick people.

Support your police. Do not let them engage with violent criminals and especially when they are committing a violent crime.

Support the people who work the mines. No going underground!

Support electrical workers. Only fix things by guiding you over the phone

Support your local bee keeper. Go get your own damn honey.

Support your local proctologist. Don’t let him anywhere near a meeting of progressive socialists.

ROME – The Islamic State (ISIS) has destroyed two ancient shrines near the UNESCO World Heritage site Palmyra in eastern Syria. One of the two was the tomb of Sheikh Mohammad Ben Ali, descendent of the Muslim prophet Mohammad’s cousin. Too bad he wasn’t in it at the time

(Look for the price of tungsten to go up fast)

Thank you Richard, M., Buck, Maria J., GoV., Wrath of Khan, and all who contributed to the site and our general education today.

5 Replies to “Some nations opt for reasoned solutions, islam makes things worse wherever it can, leftists rely on slight of hand and sophistry: Links 3 on June 23 – 2015”