1. Gates of Vienna has posted an article explaining who the nun was who testified yesterday before congress on the victims of the Islamic State. Stunning how she was denied a visa to the US on the basis that she might try and become an illegal immigrant. She would be the only illegal that the Obama admin didn’t want if she did.

2. Three arrests for terrorism in Poland

The Internal Security Agency (ABW) was entrusted with the probe, and unofficially, the Polish Press Agency has been informed that the suspects are Chechens who were allegedly funding operations by the Islamic State.

MP Marek Biernacki, head of the parliamentary committee for the special services, has described the ABW’s action as a success.

He noted that the threat of the Islamic State is due to be discussed as the next session of the committee.

3. This article on the bombs in Thailand seems to deal with the issue much more honestly than the one in the previous post. It admits that its likely muslims who wish to create islamic states in three provinces of majority Buddhist Thailand. At least 50 Palestinian Arabs were wounded in a blast that occurred Thursday inside a training camp for terrorists in Gaza, Hamas officials, medics and witnesses said, according to AFP. […] The health ministry spokesman in Gaza, Ashraf al-Qudra, said the blast wounded 50 people, five of them in a serious condition, and including children. […] A doctor in the enclave, Baker Abu Safia of Al-Awda Hospital, said 30 wounded people were brought to his establishment, most of them women and children.

(This may require a moment’s reflection. In Italy, the home of the Vatican, a Catholic procession was disrupted by muslims. Meanwhile, if a Muslim arse-lifting event was disrupted by Catholics Obama would weigh in himself, not to mention everyone else in the media in the formerly free West)

On Sunday morning, a group of young Muslim immigrants interrupted a Catholic procession in honor of the Virgin Mary with verbal insults, shouting, and threats as the group passed in front of the Islamic Cultural Center in Conselice, a small town in lower Romagna.

In predominantly Catholic Italy, the month of May is dedicated to the traditional processions carrying a statue or image of the Madonna, usually accompanied by the singing of hymns and praying of the rosary.

The Marian procession is a tradition in Conselice, and every year, the faithful gather at the Piazza Foresti and then proceed along a number of streets including the Via Dante Alighieri, which also passes in front of the Islamic Cultural Center. On Sunday, after the 9:30 a.m. Mass, a group of 100 faithful, including several small children preparing to receive their first Holy Communion, began the procession as usual.

(Anyone who objects to this policy in Israel or anywhere in the West today should be prepared to offer an address where they themselves live and be prepared to take a few of these illegals to their own home and pay for their medical and food costs etc. from their own incomes)

TEL AVIV, Israel, May 14 (UPI) — The Israeli government appears to be serious about sending perhaps more than 50,000 African refugees out of the country.

The immigrants have largely come from Sudan and Eritrea over the last 10 years, but the Israeli government is now taking action to ship them out, The Washington Post reported Thursday.

Israeli officials will soon send letters to the immigrants offering a choice: $3,500 plus a one-way ticket to another destination, or stay and live behind bars. The immigrants have 30 days to make up their mind.

7. Engineer sped train up before curve instead of slowed down

(According to locomotive engineers who called in to Mark Levin on Wed. the track could have handled the 110 MPH speed as well. What caused it to crash was the deliberate pulling of the emergency brake 5 seconds before it went into the curve)

8. English report on advances by Hizballah and Syrian forces against Islamic State and related forces.

9. Indonesia, Malaysia and Thailand have been turning away migrant boats

(There are dozens of muslim countries. How many muslim refugees have any of them taken? The article explains that the only people who have offered any food or physical relief are the Thais who are a Buddhist people and nation. This needs to be made clear)

10. Syria conflict: IS advances on ancient ruins of Palmyra 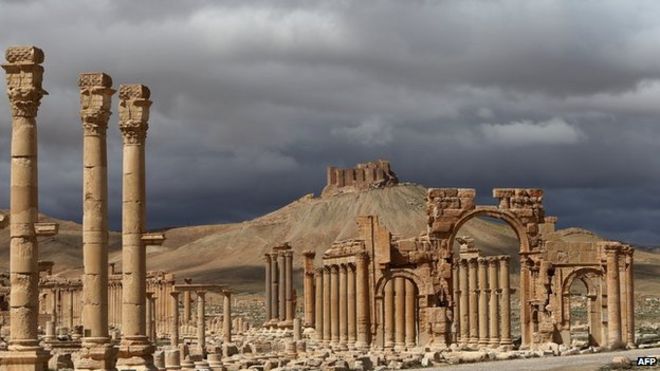 The jihadists seized buildings on the eastern edge of the adjacent city of Tadmur on Thursday, but their push was reportedly halted by the Syrian army.

Syria’s antiquities chief warned that if IS seizes the Unesco World Heritage site it will destroy everything there.

The group has ransacked and demolished several ancient sites in Iraq.

Palmyra has already suffered some damage during the four-year civil war.