2. John Voight weighs in on Obama and Israel and the Western World.

(Typically what celebrities think shouldn’t concern us other than it can be so influential one must ay attention because of its influence more than its truthfulness or information value. But when they come out against the left or for Israel these days, they are basically giving up their careers to tell us what they feel is important and that shows integrity. Very few up to now who actually side with reality in Hollywood ever get any significant work again while those who do the Obama narrative have to get an agent for their agent. Daily mail link above)

3. Harrowing footage of the moment teenager was dragged from bus stop before being hit with a rock and brutally raped in garden

These are the horrific scenes where a teenage girl was grabbed at a bus stop, dragged into a garden, beaten with a rock, and then brutally raped.

Detectives are hunting for the attacker who pounced on the 18-year-old girl last Friday.

Officers described the footage as ‘harrowing’, but released it in an effort to identify the attacker, who struck at a bus stop on the outskirts of Leeds in the Beeston area of the city.

The attacker, is described as being of Pakistani or Middle Eastern origin, and is in his early 20s, with receding black hair. He is of slim build.

The footage shows the man drag the girl onto an area of grass behind the busy bus stop.

Detectives believe that several motorists passed the scene during the attack and fear that the man will strike again if not caught.

Officers said the man hit the defenceless girl with a large stone to subdue her before subjecting her to a serious sexual assault.

4. Why my own Royal Society is wrong on climate change: A devastating critique of world’s leading scientific organisation by one of its Fellows

The implication was clear: the Society seemed to be saying there was no longer room for meaningful debate about the claim that the world is warming dangerously because of human activity, because the science behind this was ‘settled’.

We hoped we would persuade the Society to rethink this position. That document was revised so that the uncertainty involved in trying to model the climate was admitted. But since then the Society has become more, not less dogmatic – despite the fact that since we sent that letter, it has become evident that there is even more uncertainty than previously thought. Carbon dioxide levels in the atmosphere have continued to rise, but since 1998 there has been no statistically significant rise in global temperatures at all.

5. At the University of Oklahoma if you shout the name of a river in Africa you will be expelled but if you beat on a white woman you can stay and even rejoin the football team. Just so we have our priorities straight.

(Get ready for a new round of significant new Obama hires)

An Egyptian disciplinary court ordered 41 judges into compulsory retirement on Saturday for supporting the outlawed Muslim Brotherhood, judicial sources said, the latest move in a sweeping crackdown on political dissent.

The government has implemented a harsh crackdown on Islamists as well as secular political opponents since then army chief Abdel Fattah al-Sisi ousted Islamist President Mohamed Mursi in July 2013 following mass protests against his rule.

The Disciplinary Council headed by judge Nabil Zaki did not immediately release the reason for its decision, but the judicial sources said 31 of the judges were sent into compulsory retirement for signing a statement that condemned the removal of Mursi.

Another 10 were removed from their posts for joining “Judges for Egypt” group which used to be supportive of the Brotherhood even before Mursi’s removal, the sources added.

Islamic State fighters are shaving off their beards and dressing as women in a bid to escape from battle, Iraqi forces have claimed.

A series of pictures have emerged showing men who have reportedly been caught trying to escape from northern Iraq wearing dresses, bras and make-up.

The photographs, posted on Instagram, show authorities appearing to pull back burkas to reveal young boys and even men with moustaches. 8. Robert Spencer live lecture on, ‘Is the Islamic State Islamic’. This is a nearly 2 hour video with Q&A and Don C. recommends it as very informative and a virtuoso intellectual performance.

(Now that the Vatican itself is in the cross hairs. But while a genocide against Christians in Egypt, Syria, Iraq and elsewhere was taking place at the hands of jihadis, it was all love peace and understanding towards muslims)

The Vatican says force may be necessary to stop attacks on Christians and other Middle East minorities by Islamic State (IS) if no political solution is found.

Archbishop Silvano Tomasi, the Vatican’s top diplomat at the UN in Geneva, said jihadists were committing “genocide” and must be stopped.

The Vatican traditionally opposes military intervention in the region.

However, Pope Francis decried the beheading in February of 21 Egyptian Coptic Christians by IS in Libya.

The militants have targeted minority religious groups in the parts of Syria and Iraq under their control. Thousands more people have been forced to flee their homes.

More at Ahram, The Telegraph, Cruxnow

10. US shuts down Saudi embassy amid security fears 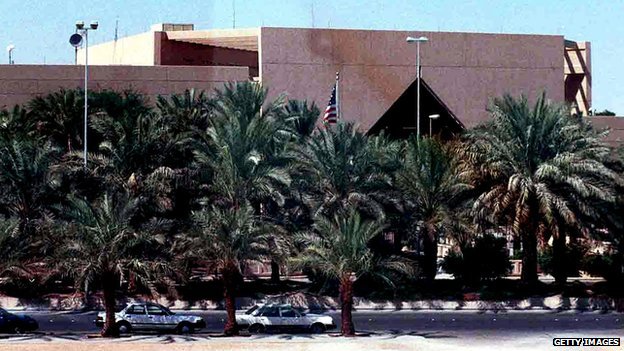 The US embassy in the Saudi capital Riyadh has cancelled all consular services for Sunday and Monday due to “heightened security concerns”.

In a statement, the embassy said consular services in Riyadh, Jeddah and Dhahran would not be available.

It urged US citizens to take extra precautions when travelling in Saudi Arabia and to keep a low profile.