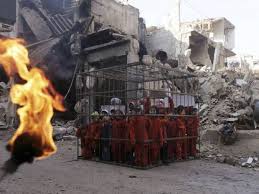 Jihadist militants from Islamic State (IS) have burned to death 45 people in the western Iraqi town of al-Baghdadi, the local police chief says.

Exactly who these people were and why they were killed is not clear, but Col Qasim al-Obeidi said he believed some were members of the security forces.

IS fighters captured much of the town, near Ain al-Asad air base, last week.

Col Obeidi said a compound that houses the families of security personnel and local officials was now under attack.