Also, since posting this, some rather revealing news about what certainly appears to be this guy have been placed in the comments. For all interested, please click the links offered by the commenters. See if they fit the thesis of this post.

(It is larger there, might be easier to read the titles at the MEMRI link)

This is a fascinating clip. Please watch it all the way through before passing any kind of judgment. One of the first curious things I noticed, was an odd sense of suspicion about this imam because early on I noticed he was using reason. Something which is anathema to islam overall.

A few times this site has alluded to the ‘wedge strategy’ and even spoken about what I call, ‘Government imams’. I would suggest this is one of them.

A one on one debate between this man and Robert Spencer would be one for the books although I believe I have seen something like it before, where Robert is arguing for the demonstrably true nature of islam using reason, islamic scripture and islamic history, against an imam who is trying to retroactively rewrite the islamic narrative in order to achieve an outcome most of us would agree with.

I would love it if this worked. But it won’t, it can’t and frankly I think this contributes to motivating young cultural muslims and other young people to join up with the jihadis because of the moral outrage when it is discovered that governments and government sponsored mosques and imams, (not saying this one is but betting it is) are discovered to be exactly that, peddling an acceptable version of islam, easily discoverable to be untrue by even a cursory look at the scripture and facts. For example abrogation is in the koran itself.  While this imam does an admirable job of trying to undo the horrific and incalculable damage the concept has done to humanity and the world, it remains right there in the koran clear as day.

I look forward to the comments on this one.

Thanks to a commenter, ‘Just a thought’, it would appear that someone who looks very similar and who’s name is the same except the last part of it has been changed to ‘From Egypt’ (Al Masry) may have been in the news before where a woman who rebuked his offer to make her his 4th wife or temporary whore annoyed him so much he called her a Jew. 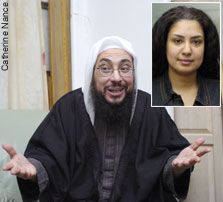 Do have a look. If it is indeed the same man it demands a few answers and raises a few questions, not the least o which is if indeed he is on the payroll to sell the Obama-Cameron narrative.

Thanks GoV and Just a Thought

24 Replies to “MEMRI: Brooklyn Imam Tareq Yousef Al-Masri on Paris Terror Attacks: We Muslims Must Admit That We Are Time Bombs and We Hate Christians”