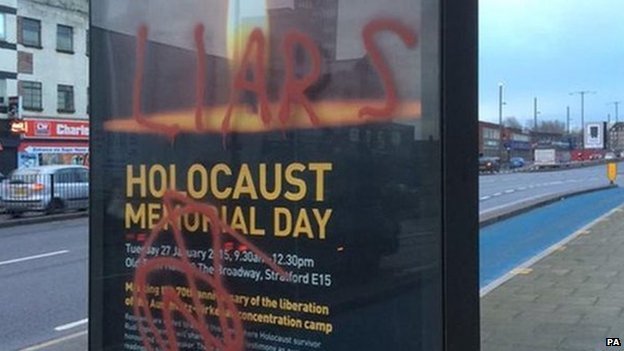 Posters advertising a Holocaust memorial event in east London have been daubed with graffiti including the words “liars” and “killer”.

The vandalism, which took place in Newham, is being listed as a “hate crime”, Scotland Yard said.

The graffiti, which is being treated as racially aggravated criminal damage, was found in four locations and has been removed, the council said.

2. Woman beheaded in the KSA for murder claims innocence.

(Sharia does not have presumption of innocence or due process. So I would say at worst it was 50/50 she is innocent. Also there is an auto start video at this site so be prepared)

Early in the speech Jindal says he’s not going to be politically correct. And he uses the term “radical Islamists” without hesitation, placing much of the blame for the Paris murders and all radical Islamist terrorism on a refusal of Muslim leaders to denounce these acts.

Jindal says, “Muslim leaders must make clear that anyone who commits acts of terror in the name of Islam is in fact not practicing Islam at all. If they refuse to say this, then they are condoning these acts of barbarism. There is no middle ground.”

Then he adds, specifically, “Muslim leaders need to condemn anyone who commits these acts of violence and clearly state that these people are evil and are enemies of Islam. It’s not enough to simply condemn violence, they must stand up and loudly proclaim that these people are not martyrs who will receive a reward in the afterlife, and rather they are murderers who are going to hell. If they refuse to do that, then they’re part of the problem. There is no middle ground here.”

I want to know who in the Muslim community in the United States has said this. Which leaders? I don’t normally cover this beat, so I may well have missed it. Hence, I ask readers to tell me if so-called American Muslim leaders have said what Gov. Jindal is saying.

And by the way, what Bobby Jindal is saying is very similar to what Egyptian president el-Sissi said earlier in the year to a group of Muslim imams.

I have to say, I am deeply disappointed in what the pope said on his papal plane about freedom of speech and punching people if he doesn’t like what they say and making the most sophomoric fallacies of false comparison. So I made this short video for him hoping to remind him of something.

Thank you Richard, M., Yucki and all. Much more to come. At least Bill Maher is catching up to Pat Condell. That is some good news at least.

25 Replies to “Charlie Hebdo issue ramping up to be another cartoon war. Better sooner than later. Links 1 for Jan 17 – 2015”