1. French police seal off town as they close in on Paris shooting suspects 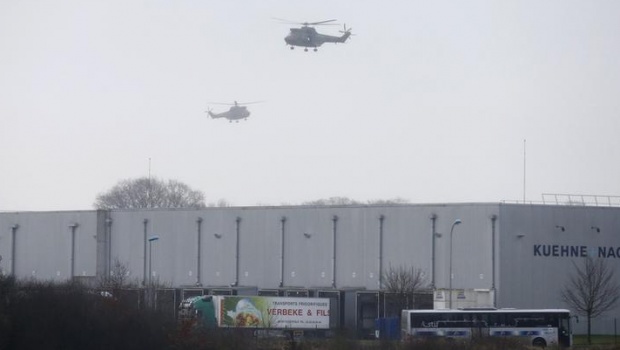 DAMMARTIN-EN-GOELE, France – French anti-terrorist police surround a small northern town and helicopters hover overhead as at least one person is taken hostage in a print works by two men believed to have carried out the attack on Charlie Hebdo.

2. Another gunman takes ‘at least’ five hostage in ‘kosher’ grocery in Paris – and police fear it is the same gunman who shot dead policewoman yesterday

A gunman linked to the Charlie Hebdo killers was today holding up to five hostages in a Kosher store in eastern Paris.

Shots rang out close to the Porte de Vincennes while the two brothers believed to be behind the attack on the satirical magazine were themselves holed up north of the capital.

French police have now named the suspected hostage taker as Amedy Coulibaly, 33, while a woman named Hayat Boumeddiene, 26, is also believed to be involved.

‘There is a hostage situation – shots have been fired,’ said a Paris police source, who said armed officers were attending the scene.

Police in France have surrounded a supermarket in south-east Paris, as the BBC’s Stephen Sackur reports

A gunman has seized hostages at a kosher supermarket in Paris as police in northern France have cornered the two Charlie Hebdo massacre suspects.

(Actually, yes they can. They just won’t name the enemy, so they cannot take the fight to them)

The threat of a terror attack in the UK is increasing and the security services cannot be expected to stop every plot, the head of MI5 has warned.

PARIS, Jan 9 (Reuters) – Several people were taken hostage at a kosher supermarket in eastern Paris on Friday after a shootout involving a man armed with two guns, a police source said.

There were unconfirmed local media reports that the man was the same as the one suspected of killing a policewoman in a southern suburb of Paris on Thursday.

A police source had told Reuters earlier he was a member of the same jihadist group as the two suspects in Wednesday’s attack at weekly newspaper Charlie Hebdo.

More to come shortly. On the bright side, a few more of these and we can stop whinging about whether or not people think we are racists.