Soothsayer:
Beware the ides of March.

Caesar:
What man is that?

Brutus:
A soothsayer bids you beware the ides of March.

2. Rabbi in Crimea reports on Nazi actions against the Jewish community Mohamed Yosri, security director of the Qalyoubia governorate, said that explosives experts have managed to diffuse two bombs planted by the attackers after the shooting occurred.

Military spokesman Ahmed Ali accused members of the Muslim Brotherhood group of being behind the attack.

4. Scarf by Scarf. A performance art piece for International Woman’s day in Denmark

My comment on the above video as left at YT:

The comparison between Catholic nuns and a woman in a burka is flagrantly dishonest. It is extremely rare that a burka is worn by choice. Women who become Catholic nuns may or may not wear the habit but most do not and they can leave the chuch or its rules anytime with zero fear of retribution from the Church or fellow Catholics. The same cannot be said for muslim women. There is no apostasy penalty in Christianity.

5. Pakistani teen burns herself to death outside police station when her attacker is released after ‘bribing police officer with £700’

A Pakistani teenager has died from her injuries after she set herself on fire outside a police station when police released her alleged rapist.

Aamna Bibi, 18, set herself alight outside the police station in Muzaffargarh district in Punjab province after her attacker managed to bribe himself free, local media reports.

She was taken to hospital with 80 per cent burns to her body, but died the following day as a result of her injuries. 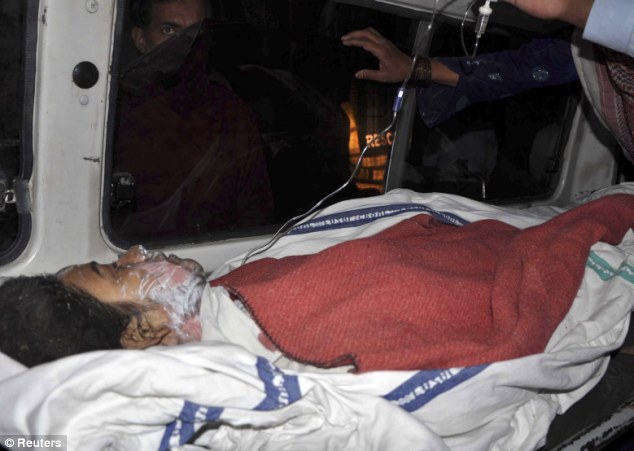 Tragedy: Pakistani teenager Aamna Bibi, seen here as she is taken to hospital on Thursday, has died from her injuries after setting herself on fire when police set free her alleged rapists