Below is an interesting part:

PLEASE DO NOT post or circulate the flyer. We are trying to avoid press, protestors and public attention. Feel free to share it with friends, colleagues and grad students though. 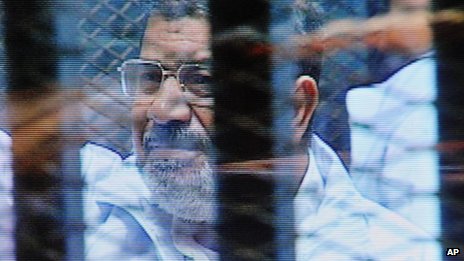 Mohammed Morsi appeared in a court in a soundproof glass cage

Egyptian prosecutors have accused ousted President Mohammed Morsi of leaking state secrets to Iran’s Revolutionary Guards.
The claim came during the second hearing of his trial on espionage charges.

Prosecutors allege that he and 35 others were involved in a plot to destabilise Egypt. The trial was later adjourned to 27 February.

Thank you Wrath of Khan, Fjordman, all who sent in material. If you have friends who still do not understand Islam and its central dogma, now might be a good time to at least try and explain it to them. Be kind, use genuine sources and Islamic texts and helpful videos like Stephen Coughlin or Clare Lopez. It may not change many minds but when things get worse at least they will have something to fall back on and think about.