(Based on idea by Tundra Tabloids)

Muslims world wide have created a new symbol using the volleyball from the Tom Hanks movie, Castaway, to try and force movie theaters world wide to ban any and all Tom Hanks films. Presumably out of anger at his excellent series, ‘Band of Brothers‘ and other WW2 and peripherally Holocaust related films which show the Jews as victims and the unbelievers as victors. 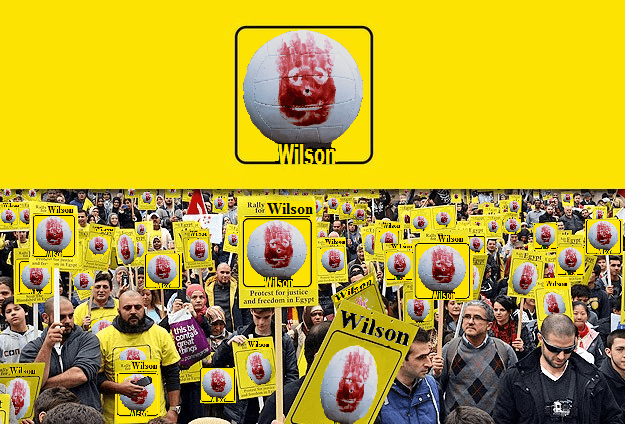 Muslims world wide have asked that we all show support by shouting, “WWIIILLLSSSOOONNN” every time we pass a Muslim Brotherhood demonstration wherever we see any sign or symbol similar to the one in the picture above. For once, I fully support this initiative and recommend that we all do it and encourage everyone we know to do it.

(Just for the record, the picture above is a photoshop and the story is a joke. But I sincerely believe people should shout as loud as they can, “Wilson” whenever they see that absurd four finger ‘R4BIA’ sign they invented to try and make themselves the victims due to the retaliation they experienced when they tried to kill everyone that stood between them and power. As usual with muslims, ‘the fight started when they hit me back’ Thank you Tundra Tabloids for the photoshop and the idea)

One Reply to “Muslim Brotherhood gather to demand banning of any and all Tom Hanks movies.”