In this article in today’s Daily mail, the point is made which is well illustrated in the video from French journalists that we translated and titled a few months ago.

From the Daily Mail article:

An armed Islamist organisation fighting on the rebel side has established sharia law in northern Syria, which has seen children whipped and adults executed in public, Amnesty International reports today.

The Islamic State in Iraq and al-Sham (ISIS) control a large part of northern Syria, including the country’s biggest city, Aleppo.

ISIS are in charge of at least seven ‘detention centres’ in the area where children as young as eight have been detained, young teens have been flogged, and adults executed after ‘trials’ lasting just minutes. 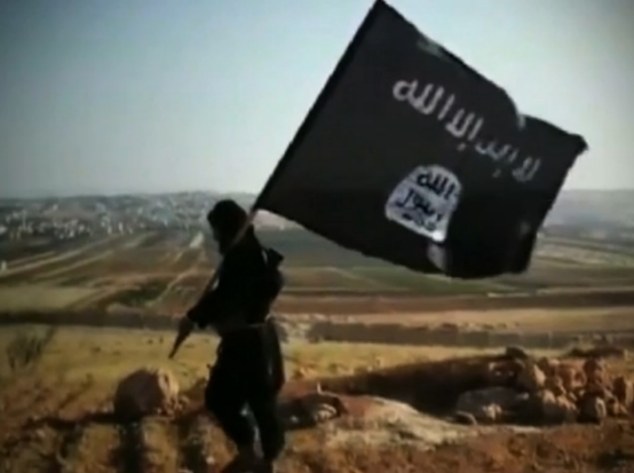 Al Qaeda group: A man holding the flag of Islamic State in Iraq and al-Sham (ISIS) walks across a hill in a propaganda video for the organisation

ISIS, previously known as Al Qaeda in Iraq (AIQ), practice several forms of torture, including electric shocks and stress positions, and regular floggings with rubber generator belts or cables, in secret prisons in al-Raqqa and Aleppo

It is critically important that people become aware of the systems that muslims create in the wake of an islamic invasion. This issue is not just one of having a large number of people with a foreign system of religion and ethics living amongst us. That would be important enough too warrant thorough study indeed. But this is vastly more.

It means the utter destruction of systems of reason and governance that we in the West beginning with the ancient Greeks and Romans etc. have developed for thousands of years and which we must, from time to time protect from those who would destroy it and take everything we have. And not just material possessions but our right to exist as we want to exist or even exist at all.

The Daily Mail article reproduced above is a partial illustration of what various muslim groups are doing in Syria but what Choudary and his gang are doing in the UK is no different and is being utterly disregarded in the media (DM excluded) as trivial or silly and when Choudary and his gang start actually whipping people for violating islamic ‘law’ they will treat it like random crime instead of what it is. The after effects of an actual invasion and process of Balkanization of the United Kingdom.

For proof of this, look at how vast numbers of muslim pedophile-rape-slave gangs are being ignored or covered up by the British establishment, press and government (much more to come on that early in 2014!) as well as how they are treated when one can no longer be ignored. As crime, and not as seditious organized behavior intended to destroy our entire way of living and viewing each other in day to day transactions, which is what it is. A replacement of our ethos, one which allows women and children to walk the streets of our own cities with a sense of safety, and that all of us have enough similarity in our sense of values that people who do rape or kidnap are rare and criminal, with an islamic-supremacist value set where those who do not belong to the elite group, Islam, will have no rights or sense of personal safety and the cost of existence as a non-muslim in our own cities becomes to high to bear.

Other examples of post invasion islamic behavior will be treated in the same way as it is the actual strategy of our government to pretend that things are other than they are for the illusion of good governance.

Please click over to the DM and if you have not seen the French video yet, please watch that. Unfortunately the TV station in France that made this video disabled embedding of it for some reason but at least you can see it at Youtube directly.

7 Replies to “As muslims gain influence, they force their rules on the population.”