An original translation by Carpe Diem 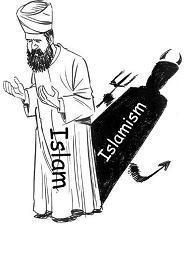 Our critics accuse us of not distinguishing between Islam and Islamism. However, unlike our critics, we critics of Islam are thoroughly informed of the object that we criticize. Our critics distinguish neatly between Islam, maybe even Euro-Islam (whatever that means), Islamism, radical Islam and even radical Islamism, whereas the last one, regardless of any conceptual content, obviously is a pleonasm, because a radical -ism is like a round circle.

Each ideology, and Islam is no exception, refers to a coherent construct, perceiving and representing itself as the absolute and as the ideal concept of a society. It cannot help but to propagate and claim the categorical imperative for itself, otherwise it would question its own legitimacy as ideology immediately.

The same applies to religious ideologies. Let us take the Catholic Church as an example. There are Catholics faithful to Rome but also Catholics who do not care much about Rome or only accept what pleases them personally. According to a strict, thus orthodox interpretation a Catholic has to listen to the pope in the first instance. His and his predecessors’ edicts are a mandatory guiding principle for a believer. If he deviates too much, he is excommunicated in the worst case. Thanks to a certain liberality that found its way into the Catholic Church, many priests by now interpret the faithfulness to Rome very broadmindedly, since they already carry apostatic traits within themselves. So, there are Catholics with a baptism certificate who are still formal members of the Church but who have already told it good bye at heart. Actually, they do not have any solidarity with its goals, and therefore are apostates. There is a reason why the Church more and more dissects right up to self-abandonment. It questions its foundations with liberal priests.

Concerning Islam, things are different. Apostasy is defined narrowly and punishment is severe. Who questions just a single surah qualifies as an apostate. Furthermore, Islam is no religion as such but first and foremost an ideology using distorted elements from Judaism and Christianity to ingeniously conceal its fascistic traits (Heinrich Himmler: “Islam is very similar to our ideology.”). It claims absolute truth for itself and divides mankind into valuable (Muslims) and worthless (Non-Muslims). Its militance when proselytizing has its roots in the Quran and cannot be questioned or relativised, since Islam doesn’t allow a contemporary reinterpretation as such. Thus, there is no radical Muslim or moderate Muslim. A Muslim is always as radical as the Quran claims from him (Erdogan: “There is no moderate Islam.”). Deviation is apostasy.

All asseverations of the West that one had to distinguish between Islam and Islamism are naïve wishful thinking and pure window dressing and do not cope with Islam as such. Moreover, it is offensive to its followers. As by implication this relativization means that there are people amongst Muslims who do not take the Quran seriously. This again is apostasy which, in Islam, must be punished with death…