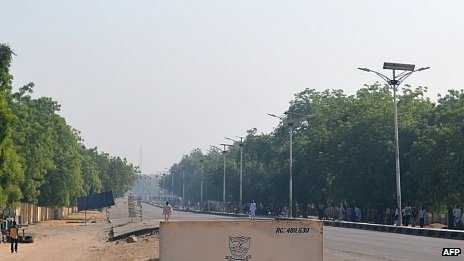 Main roads in Maiduguri were deserted on Monday in the wake of the attack
Boko Haram insurgents have attacked a military airbase in north-eastern Nigeria, destroying two helicopters, the authorities say.

FRANCE 24 has learned that the Algerian government has given a French judge the go-ahead to exhume the decapitated heads of a group of French monks who were killed in Algeria in 1996.

The mystery surrounding the death of seven French monks, murdered and decapitated in Algeria in 1996, may be closer to being solved thanks to the efforts of a French judge.

(When this sort of thing happened in past centuries it was recorded for posterity and educated people became aware of it. This story, which happened as recently as 1996, will probably not even make it to a ‘movie of the week’ due to fears of inflaming the feelings of the group that actually did it. Check the video at the link)

4. Burma to Act Against Defamatory Banner After OIC Protests

RANGOON — Burma’s government says it will take action against Buddhist protesters who allegedly carried a banner insulting Islam during a demonstration against a visiting delegation of global Islamic leaders last month.

The state-run New Light of Myanmar newspaper reported that protesters in Rangoon’s Bahan Township received permission to demonstrate against the delegation from the Organization of Islamic Cooperation (OIC), but not to hold the banner, which the newspaper described as “assaulting faith.”[…]

The biggest anti-OIC demonstrations were in west Burma, but in Rangoon about 1,000 protesters, mostly Buddhist monks, also marched from Shwedagon Pagoda to Sule Pagoda. In Bahan Township, some Buddhists monks allegedly held a banner saying, “Oppose Islam, as it is similar to animalism, with uncontrollable birth rates.”

Two female activists were arrested and detained in Saudi Arabia on Friday after being caught behind the wheel in Riyadh.

Aziza Al-Yousef, who was driving the car, and her passenger, Eman Al-Nafjan, said they were detained at a police station in the capital until being released into the custody of their respective husbands, who were asked to sign a statement pledging their wives would not drive again, CNN reported.

(I would almost understand if they were arrested for parking. But seriously, the real insult is that it was the husbands who had to sign an agreement and held responsible. Because women in Saudi Arabia clearly are not thought to have agency, and therefore cannot be held to an agreement.)

Thank you Fjordman, M, Wrath of Khan and all who sent in material. So much islamic horror. So little time.