In the second video, a man with an automatic pistol seems to be firing nearly randomly in the street. “Oh those Christians with their bibles and their guns”, ay Obama?

2. Tripoli protests US ‘kidnap’ of Libyan in Qaeda raid

Libya said it had demanded an explanation from Washington Sunday for the “kidnap” of a citizen in an unauthorised commando raid on its territory that netted a top Al-Qaeda suspect.

3. Shabnam sends this photo, alleged to be a very recent one of a ‘man on the street’ protest against Obama. Apparently the outreach program is going swimmingly. 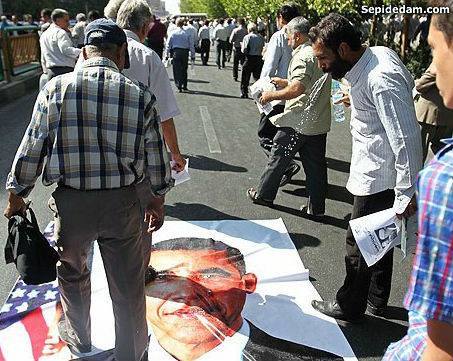 5. Swedish politician dies from attack he suffered in a racial hate crime against White Swedes. Original and Google translation.

At least one chaplain was told that if he engaged in any ministry activity, he would be subjected to disciplinary action.

(It seems Obama has learned some tricks from the CBC. Typically when they face a budget cut of any size or kind and for any reason, they chop the one thing they have which people actually like, such as Hockey Night in Canada etc. while leaving the grotesque inefficiencies and partizan junkets alone in order to make the public squawk.)