1. People of Shambala reviews the reviews of the Diana West-book-tempest. (In my opinion, the most controversial book since The Bell Curve, as well as the book most reviewed by people who haven’t read it)

“She should not have written this book.” This was the definitive word of David Horrowitz, a former communist activist turned conservative pundit and editor of online journal Frontpage Magazine. Ironically, the magazine claims to tout liberty, asserting, as its tag line, that “inside every liberal, there is a totalitarian waiting to get out.”

The phrase, “it takes one to know one” comes to mind. For weeks this self-professed bastion of free thinking has devoted a large store of energy to trashing journalist and author Diana West and her latest book, American Betrayal.

The woman, named as Sabra R, is part of a team charged with combating terrorism and crime. According to the Telegraaf, the security service fears she could be susceptible to the influence of radical Muslims and can no longer be allowed to do her job. 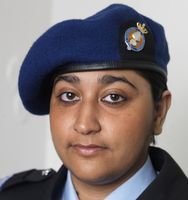 3. Muslims protest the Miss World Pageant in Indonesia. (The woman who says women should be judged instead on adherence to religion is pretty funny)