In the Sky news story, a package containing batteries and wires was found near a mosque on Sunday night and a loud bang was reported being heard on Friday night. So, 2 nights after the explosion the bomb was found apparently. 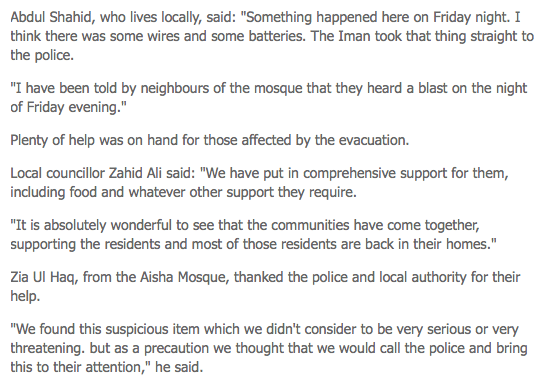 In this story, the imam finds the bomb remnants and takes it home for the weekend then gives it to the police. It’s starting to sound a lot like Hilaley.

West Midlands Police also said a loud bang heard by residents in the Caldmore area of Walsall late on Friday “appeared to be consistent” with the device exploding.

No one was injured and minimal damage was caused around the device, which was found by a local man on Saturday in an alleyway adjoining the Aisha Mosque and Islamic Centre.

Police were called to the mosque on Rutter Street at around 10.45pm on Saturday following the discovery of the bomb, which had initially been taken home by a worshipper who failed to realise what it was.

…and exactly why does someone take home an unexploded bomb not realizing what it is?

Is that fish I smell?