1. China jails 19 Uighurs (muslims who seem to be ethnically similar to Han Chinese)

(Reuters) – Courts in China’s far western region of Xinjiang have sentenced 19 ethnic Uighurs to up to six years in jail for promoting racial hatred and religious extremism online, in the latest crackdown on what China sees as violent separatists.

All but one of those jailed were from the heavily Uighur southern part of Xinjiang, including eight from the old Silk Road city of Kashgar, the official Legal Daily reported on its website.

2. American convert to Islam arrested for threatening to kill his mother and her boyfriend for feeding him pork.

3. Vimeo which has now deleted the Pat Condell video without a word of explanation Vimeo really needs to think about its strategy carefully. Today, it was Pat Condell who made an opinion video without swearing, violence or nudity and was factual and responsible. But once you fold like Vimeo did, you know it will not end there. As the 2 part excellent and important episode of Southpark called, ‘Cartoon Wars’ explains, once you show you can force them to your will, then you can force them right out of existence. Because every group with an axe to grind knows you cave to pressure. Vimeo will find its cowardice is its undoing. Not because of any threat by terrorists or ‘Anonymous’ or anything. But because their cowardice is so useful to anyone who may object to any content they may host. And for every opinion out there, you will find someone who doesn’t like it. Vimeo; you should be truly ashamed of yourselves. You deserve to be. 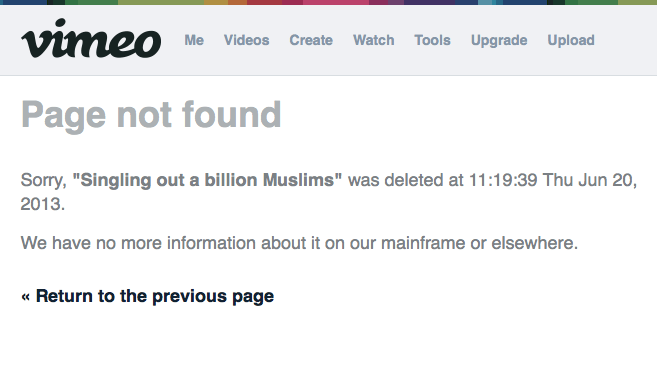 4.  This is an older story from December last year. But its good to keep handy to show to multiculturalists and people who think religious-outreach programs and so on are anything other than pure islamic supremacy.

The religious police in Saudi Arabia have raided a house in the Al Jawf Province and arrested 41 people, who were “plotting to celebrate Christmas,” a police statement said.

­The police said that the detainees were Christian guests of an Asian diplomat, reports the Lebanese newspaper Al-Akhbar.