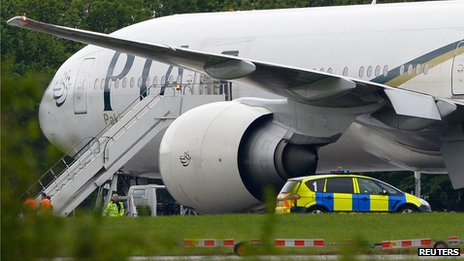 RAF Typhoon jets were scrambled to escort the airliner to Stansted
Two men have been charged with endangering an aircraft after RAF Typhoon jets escorted a passenger plane over the UK.

Tayyab Subhani, 30, and Mohammed Safdar, 41, both of Nelson, Lancashire, were detained at Stansted on Friday.

Police boarded the Pakistan International Airlines flight, originally en-route to Manchester, after it was diverted to Stansted.

The defendants are due at Chelmsford Magistrates’ Court on Monday.

One passenger told the BBC the pilot had informed them there had been threats.