2. TRIPOLI, Lebanon (Reuters) – A Syrian-born Islamist cleric who taught one of the men accused of hacking to death an off-duty British soldier on a London street praised the attack for its “courage” and said Muslims would see it as a strike on a military target.

In an interview in Tripoli, northern Lebanon, where he has lived since being banished from Britain in 2005, Omar Bakri, founder of banned British Islamist group Al Muhajiroun, said he knew suspect Michael Adebolajo from his lectures a decade ago.

3. Daniel Pipes: Muslim Acts of Beheading in the West

5. Swiss muslims come down with a case of Backlashophobia

7. Jesus H. do these guys never get dressed? Its like the cult of Wee Willie Winkie. 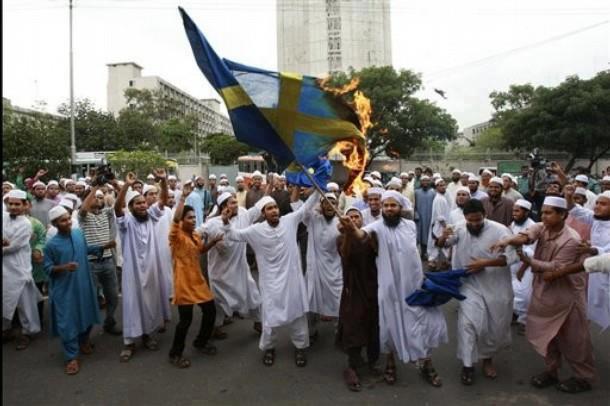 9. Now I understand the leftist-islamic alliance. muslims will have a woman stoned to death or at least jailed or lashed if she is raped and leftists will ticket your car because someone torched and it became impossible to move. Both ideologies are so vicious and full of hatred for humanity and reason that they punish the victims.

Thanks to Oz-Rita, an English article on the parking tickets for victims program in Sweden.