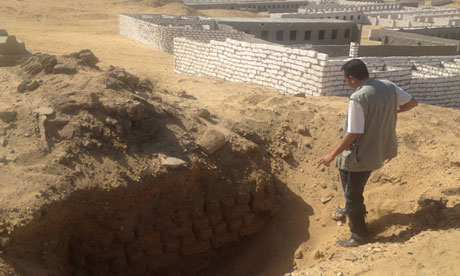 An archaeologist inspects a new cemetery illegally built near the Black Pyramid at Dahshur.

In Manshiet Dahshur, 25 miles south of Cairo, the villagers recently extended the boundaries of the cemetery. For Ahmed Rageb, a carpenter who buried his cousin in the annexe, it was a logical decision. “We want to bury the dead,” he said, strolling through the new cemetery after visiting his cousin’s tomb. “The old cemetery is full. And there is no other place to bury my family.”

There is just one problem. The new tombs are perilously close to some of Egypt‘s oldest: the pyramids of Dahshur, less famous than their larger cousins at Giza, but just as venerable. This is protected land, and no one is supposed to build here – yet more than 1,000 illegal tombs have appeared in the desert since January.