H/T with many thanks to Magic Martin for a lot of links and info.

Morsi leaves through back door as Egypt protesters surround palace

Egypt’s presidential palace was encircled by anti-Muslim Brotherhood protesters in a violent demonstration in Cairo, as the constitutional crisis caused by Mohammed Morsi’s assumption of unchallengeable powers showed no sign of abating.

Egyptian protesters chant outside the presidential palace in Cairo on Dec 4, 2012. President Morsi left the palace as it was surrounded by up to 100,000 protesters. Photo: AFP PHOTO/GIANLUIGI GUERCIAGIANLUIGI GUERCIA/AFP/Getty Images

By Richard Spencer, and Magdy Samaan in Cairo

Mr Morsi was forced to leave the palace through a back door as up to 100,000 people moved in to surround it on all sides. Some stones were thrown, one hitting the rear car in the president’s convoy.

Clashes with security .. And a police armored demonstrators overlies

Federal demonstrators carrying officer and shouting to drop the system

I don’t know if this photo is real or not but I like it anyway. CORRECTION: Its real 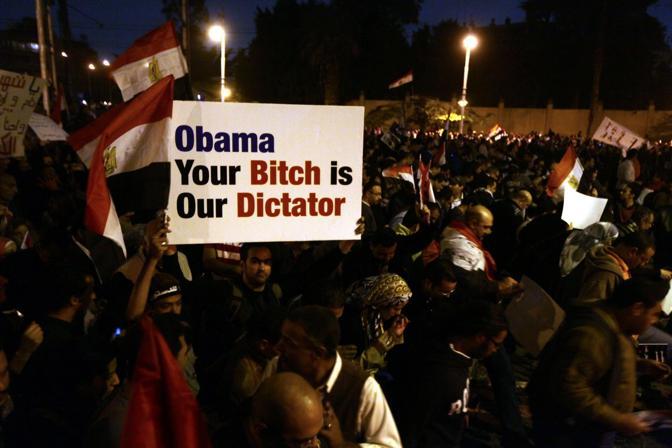