Neighboring Asian states of Bangladesh and Myanmar (Burma) are, independently, trying to calm fears of further intercommunal violence between Buddhists and Muslims after serious incidents in recent months.

At least 19 Buddhist temples were razed to the ground in Bangladesh at the end of September, with at least 120 Buddhist homes and some businesses also attacked by Muslim mobs. The violence broke out in the town of Ramu town, Cox’s Bazaar, near Bangladesh’s border with Myanmar, and spread to five towns and several dozen villages. 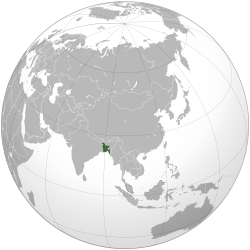 Hundreds of Buddhist artifacts were looted from the temples, some of them a thousand years old.

In the state of Rakhine, Myanmar, nearly 3,000 houses, as well as 14 religious buildings and eight rice mills were destroyed in rioting across nine townships between October 21 and 27. At least 88 people were killed, and 129 hospitalized. Police also fired on Buddhist demonstrators – killing one man and injuring another – who had gathered in Kyauknimaw, Ramree Island, Rakhine, to demand extra security and the removal of Muslims from Buddhist-majority areas. One demonstrator told The Irrawaddy that it was “no longer possible [for Buddhists and Muslims] to stay together in the same community.”