I have been a subscriber to STRATFOR for a number of years now, and they make quite a fuss about their non-partizan policy and how they are a geopolitical intelligence forecaster with no judgement on events or groups.

You can imagine my disapointment when I read the following SITREP on today’s stunningly peaceful demonstration in France, were 100 people asked for a national referendum on mosque construction and Islamic immigration. Perfectly reasonable requests given the actions of religious Muslims in France, and the effect immigration is having on French culture. In fact, one could argue that immigration as Europe is doing it might contravene the UN definition of genocide via population replacement. Yet STRATFOR elected to go father than the French media even who referred to the protestors as, “Far-Right” and added ‘extremist’ to the description even though they committed no violence, did not incite violence and gave zero indication of any desire for vioelnce but merely for long-overdue democratic process and an enforcement of the French laws of secularism, ‘Laicite’.

Then, just a couple of hours after I received this one, another SITREP came in describing an attack by Boko Haram today in Nigeria where they murdered 23 people at minimum. Check out the description below: 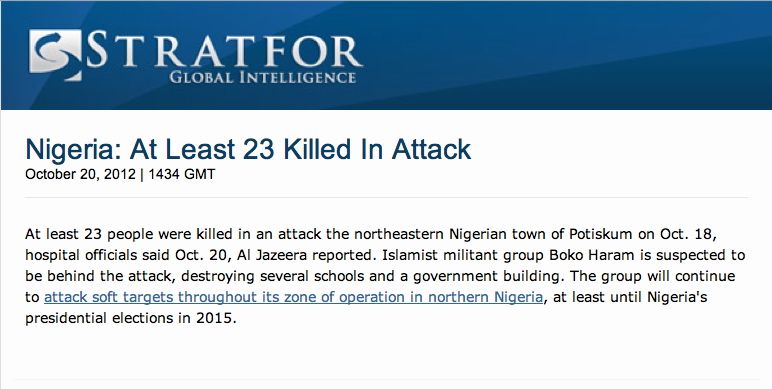 Get it? A hundred French citizens peacefully demand their democratic rights as specified under French law and disperse without any objection and are “far right extremists”.

But a blood thirsty Islamic supremacists group that has mass murdered hundreds if not thousands of non-combatants especially Christians worshipping peacefully in their churches, are “Islamist Militants”.

I must go over my old articles and see if they refer to the shootings at Fort Hood as “work place violence” because from where I sit, STRATFOR has eaten the Obama pudding.

12 Replies to “STRATFOR, not as neutral as they claim.”