The matriarch of the Khadr family insisted a month ago that al-Qaeda-sponsored training camps were the best place for her children. “Would you like me to raise my child in Canada to be, by the time he’s 12 or 13 years old, to be on drugs or having some homosexual relationship?” she said. “Is it better?” 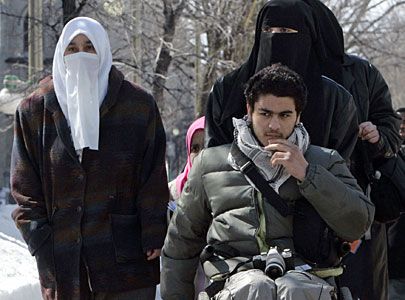 Today, 47-year-old Maha El Samnah is to step off a plane at Toronto’s Pearson airport. She will return from Pakistan to the country of her citizenship after a prolonged absence that was rarely dull. Her youngest son is coming with her. He has been wounded in battle, as have several other family members.

Abdul Karim Khadr, 14, is recovering from a bullet that grazed his spine last October. His father, known as al-Kanadi, Arabic for “the Canadian,” was among the militants killed in that battle, with Pakistani counterterrorism agents.

Family members have said that if the teenager is ever going to walk properly again, he’s going to need the help of the Canadian health-care system.

Government officials said yesterday that they have given the two members of the Khadr family emergency one-time-only passports. Ottawa says it has helped arrange for the flight home and worked out the necessary exit visas with the Pakistanis. As citizens, the officials point out, the mother and son have a right to return to Canada.

But they stress that taxpayers are not on the hook for the bill. “The family have used their own funds to travel back to Canada,” said Reynald Doiron, spokesman for Canada’s Foreign Affairs Department.

Abdul Karim has been out of the country too long to qualify for universal health care, so the family would likely have to pay his medical bills as well, at least initially.

Years ago, the Khadrs lived in Ottawa and Toronto. The father, Ahmed Said Khadr, became radicalized during the 1980s Soviet war in Afghanistan, where he fell in with leaders of what would become al- Qaeda. He moved his family to the region. He presented himself as a humble Islamic charity worker as he returned to Canada to raise funds in mosques, working himself into tears as he told of the plight of Afghan widows and orphans. But in Afghanistan, he lived a different life.

Family members said they lived in an Afghan compound with Osama bin Laden, a close friend. The family fled Afghanistan as U.S. bombs rained down on the country in 2001. Last month, a man

Ms. El Samnah has recently expressed joy that her husband died as a martyr for Islam.

and I would love my son to grow with this mentality.”
All material copyright Bell Globemedia Publishing Inc. or its licensors. All rights reserved.

2 Replies to “Another ‘blast’ from the past: Khadr matriarch returning to Canada”