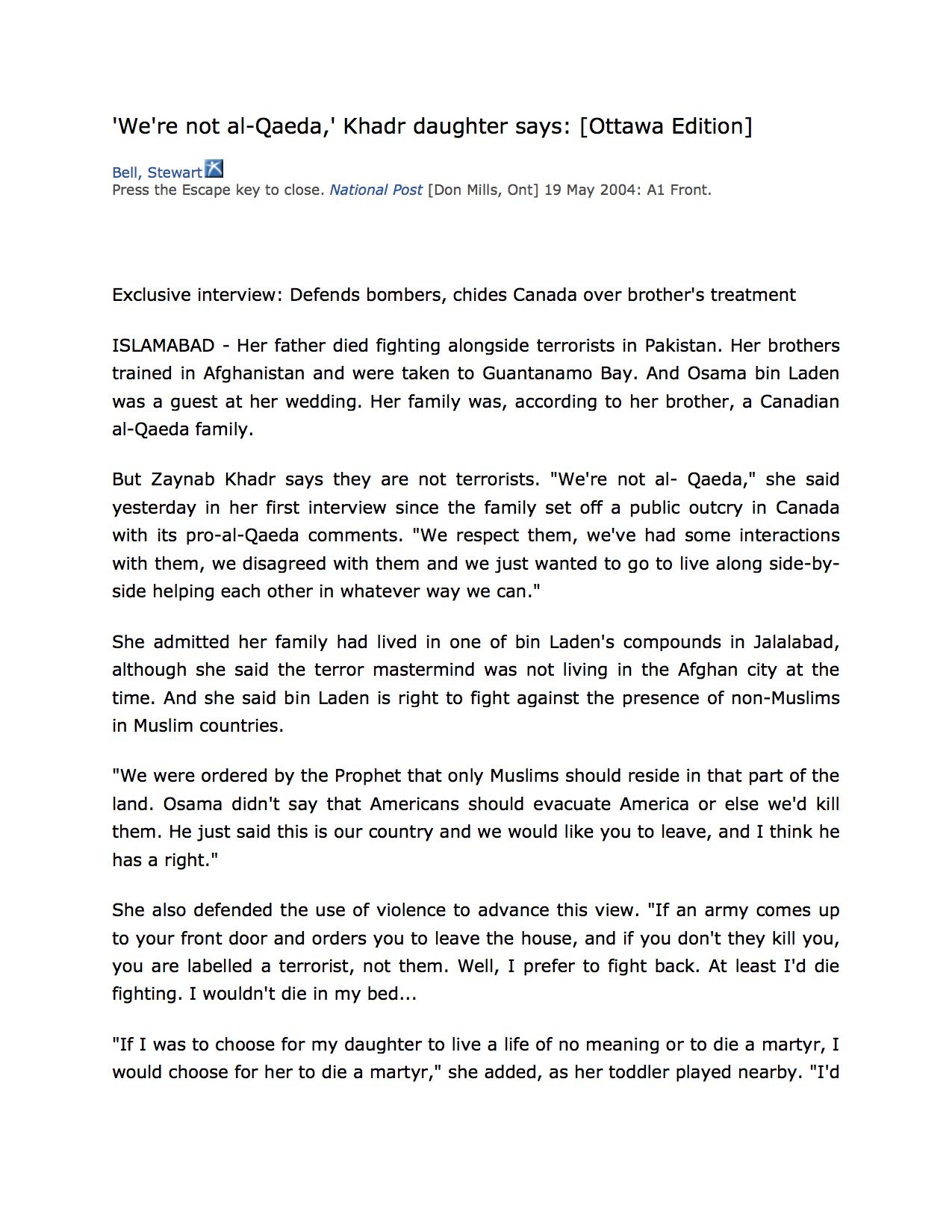 love to die a martyr. It’s a desire that I believe that any Muslim would have or should have.”

Mrs. Khadr was born in Canada but spent most of her life in Pakistan and Afghanistan with her Palestinian mother, five siblings and her Egyptian-Canadian father, Ahmed Khadr, who called himself an aid worker but was long a target of counter-terrorism agents who accused him of associating with bin Laden.

The Khadr family fled Kabul when the Taliban fell in November, 2001. Two of the sons, Omar and Abdurahman, were captured and taken to Guantanamo Bay. And

then, last October, Mr. Khadr was killed in a shootout with Pakistani security forces.

Pakistan says he was a terrorist.

“They were terrorists, confirmed terrorists,” said Major-General Shaukat Sultan Khan, spokesman for the Pakistan Army. “Their activities were being tracked for [the] past few days and it was known that these people were involved in some of the raids that they had been conducting on the coalition forces across into Afghanistan in [the] Shkin area.

“Their activities were being tracked by the intelligence agencies and once their presence was confirmed, this operation was launched. Their involvement in terrorist activities was proved beyond doubt.”

The youngest of the Khadr boys, Abdul Karim, was with his father when he died and was badly injured by gunfire. When the boy returned to Toronto with his mother in March, Canadians were outraged by the family’s pro-al-Qaeda views and their association with bin Laden.

A petition calling for their deportation garnered thousands of signatures. A Liberal

MP said they should be charged under Canada’s anti-terrorism law and Ontario child welfare authorities launched an investigation into the mother after a child psychologist raised concerns.

“Taking him away from her would practically kill both of them. Our family has been cut into too may pieces. It’s time to bring as much as they can together, not to take them further apart…. The way you think does not give anybody the right to take away your child.”

The Khadrs are viewed more sympathetically in Pakistan, the birthplace of al- Qaeda. Lieutenant-General Hamid Gul, Pakistan’s former intelligence chief, said Zaynab’s mother came to him for help. Canada, she told him, had shunned her because she was a Muslim.

“She said that, ‘We are Muslims, we believe in the Islamic faith, and when my husband came to know that in Afghanistan, Taliban had set up an Islamic system according to shariah [Islamic law], we thought we will come and live in that country,’ ” Gen. Gul said.

He said Canada should be ashamed of the way it has treated the Khadrs. “It doesn’t speak very well of the Canadian morals, I’m afraid, their regard for their own citizens.”

Mrs. Khadr lives in Islamabad now with her daughter and sister. Her brother Abdullah is hiding somewhere in the region, afraid he will be sent to Guantanamo if he is caught. Her plight was not made easier when her brother Abdurahman returned to Canada and said his was an “al-Qaeda family.”

She lives off the charity of others, since the family’s bank accounts are frozen under United Nations anti-terrorism regulations. She would like to return to Toronto but the government will not give her a passport, only a travel permit, and she fears that if she goes, she will be unable to leave Canada again.

The Canadian government, she said, is “trying to get us back in Canada and just shut us there so that we won’t cause any more harm. I can’t see what harm we’ve caused. I mean, if you look at it, we’ve had a lot to deal with in the last two years and nobody has anything against us.”

Does she understand why so many Canadians are outraged at her family?

“I can understand in a way because they can’t understand. They’re going to have to try to step in our shoes to try to understand why we believe the way we do. I’m not saying suicide bombing is the best thing … [but] these people who go and kill themselves are doing it for a reason. They are trying to tell the world something. They have been trying to say it for a long time. It’s just people won’t listen, so sometimes you just have to do things in a way you don’t like because it’s the only way left.

“I have nothing against the Canadians,” she added. “We always thought the Canadians were a lot more, what should I say, stable. I mean, I used to think the

Americans were too arrogant. But we always thought the Canadians were more human, more down to Earth. But what they’re doing right now seems to be just obeying the orders of the Americans.”

Black & White Photo: Global TV, CanWest News Service / Zaynab Khadr says Canadians have no right to try to separate her brother, injured in the al-Qaeda gunfight that killed his father, from her mother, who wants her children to become martyrs. “The way you think does not give anybody the right to take away your child.”