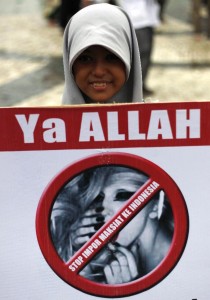 A radical Islamist organization has promised to bring “chaos in Jakarta” if a planned concert by Lady Gaga goes ahead.

The Islamic Defenders’ Front (FPI) “is strongly rejecting Lady Gaga’s concert because we know very well how she is during the performing in concerts everywhere,” the organization’s chairman Habib Rizieq said recently.

The Jakarta Post reports that he said that FPI members take to the streets if the concert — scheduled to take place in Jakarta on June 3 — went ahead. Habib said that there would be “chaos in Jakarta” if Lady Gaga performed.

In March the FPI and other hardline Muslim organizations protested in Jakarta against liberalism,which they claim ruins morality.

Indonesian Council of Ulema (MUI) chairman Cholil Ridwan has also said that he believes the Lady Gaga concert is part of a plan, “intended to destroy the nation’s… read more.

3 Replies to “Muslims against Lady Gaga”