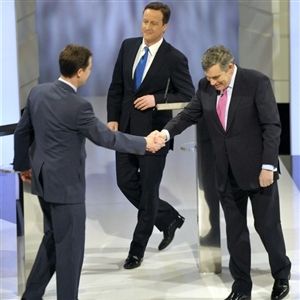 Local council elections on Friday saw the coalition Conservative-Liberal Democrats Government wounded and embarrassed by huge losses. Although Boris Johnson was reelected as London Mayor, after only two years in power, the dominant Conservative Party lost a massive 405 councilors in the 181 districts that went to the polls in England, Scotland, and Wales.

But not every party is in decline in the UK. The rise of the Green Party’s Caroline Lucas, George Galloway of Respect — a kind of Leftist-Islamist coalition — and the United Kingdom Independence Party portends, possibly, the beginnings of a seismic shift in electoral politics, and one that might eventually lead to the collapse of British politics as we know it.

Often portrayed as merely picking up disgruntled voters, who’d prefer to vote Labour or Conservative, the truth is that the majority of people only vote for a small party — that stands much less chance of getting into power, at least in the short term — if they are convinced of its message. With the major parties ignoring the issues, it is, inevitably, the voter with no real interest in, or understanding of, politics that votes for the mainstream today.

Hence, the flip flopping — perhaps the flailing about in desperation — of the majority . Thrown out of power only in 2010 — with talk of it being cast into the “wilderness” – Labour was by far the biggest winner last week, picking up an extraordinary 823 councillors.

But is anyone actually convinced by Labour? No. it is that the public voted against the Conservatives and the Lib Dems this time, just as they voted against Labour last time, at the last general election.

UKIP is the party that worries the Conservatives. And with good reason. Recent polls have shown… read more.

3 Replies to “Britain: a nation of flip floppers?”