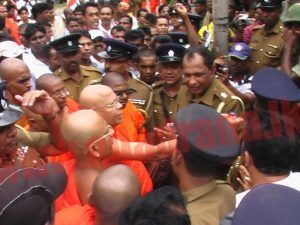 Over 1,000 protesters in the area of Dambulla, Sri Lanka, have rallied against the Masjidul Khaira mosque, which they claim did not obtain the proper planning permission.

The issue of planning permission does not seem to be the real objection to the mosque, however. According to the Ceylon Times, Akmeemana Dayarathna Thera, one of the monks on the rally, said, “We asked them to remove the mosque as Dambulla was declared a holy city with a sacred temple.”

According to the International Business Times, the mosque was firebombed the evening before the demonstration. The Army, Police and the Special Task Force (STF) were deployed to protect it, and Muslim worshippers, from attack when a large group of Buddhists surrounded the building during… read more.

6 Replies to “Buddhists demand demolition of Mosque and Muslim shrine”