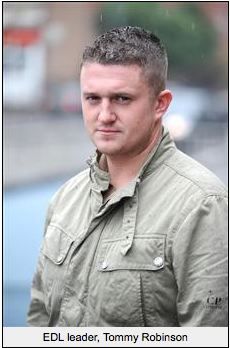 English Defence League leader, Tommy Robinson, has been warned by police there is a threat to his safety, ahead of the group’s upcoming protest march through Luton on May 5.

The ‘Osman warning’ document, as it is known, details that police are in receipt of intelligence that indicates a threat to cause Mr Robinson serious physical harm over the coming weeks.

The document reads ‘An EDL march is planned for Saturday, May 5 and together with the planned march and TV programmes it is believed that tensions have risen against both the EDL and yourself as the leader of the EDL’.

But Mr Robinson (pictured) said that he isn’t concerned by the warning and the march will go ahead.

He said: “This is just scare tactics to try to stop us going ahead with the protest through Luton.

“If we cancelled the march I’d be letting them win.

3 Replies to “EDL will march despite death threats to leader”