Thanks Golem for this one.

EL CAJON — Search warrant records obtained Wednesday in the beating death of an Iraqi-American woman show a family in turmoil and cast doubt on the likelihood that her slaying was a hate crime.

Shaima Alawadi, a 32-year-old mother of five, was apparently planning to divorce her husband and move to Texas when she was killed, a family member told investigators, according to the court documents.

The records obtained at El Cajon Superior Court also reveal Alawadi’s 17-year-old daughter, Fatima Alhimidi, who called 911 to report the attack, was distraught over her pending arranged marriage to a cousin.

A search of Fatima’s cellphone records shows that while she was being interviewed by investigators hours after the attack, someone sent the teen a text message that read, “The detective will find out tell them (can’t) talk,” the affidavit states.

For years, the media have assured us that Americans are suffering from a mental disorder called “Islamophobia.” Oddly enough, the only evidence they’ve ever been able to produce for this charge is that many Americans believe in freedom of speech, freedom of religion, women’s rights, etc. (values not shared by Muhammad and his companions).

Recently, however, the media finally found the proof they’ve been waiting for. A Muslim woman named Shaima Alawadi was brutally murdered in her California home. A note was reportedly found beside her body, calling her a terrorist and telling her to go back to her country. Her family said that she had received a similar note a few weeks earlier. Clearly, Shaima was murdered by racist, Islamophobic bigots who spend their days reading articles at Jihad Watch and Atlas Shrugs (but who somehow manage to ignore Spencer and Geller’s repeated calls for peaceful activism). 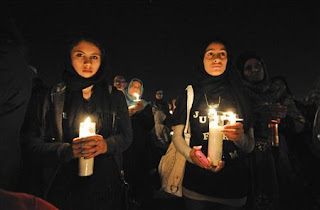 Even before the facts were in, the media leapt at the chance to expose the bigotry and intolerance so prevalent in America. They assured us that Shaima was killed because she chose to wear the hijab, just as Trayvon Martin was killed for wearing a “hoodie.” Women around the world have been posting pictures of themselves wearing the hijab, in a movement called “One Million Hijabs for Shaima.” Muslims and non-Muslims have gathered at vigils to remember her.

But facts are beginning to emerge, and things aren’t looking good for the media. Shaima was planning to divorce her husband and move to Texas. Her daughter Fatima was distraught over an impending arranged marriage with her cousin. As Fatima was being interviewed by police, she received a text message, which said: “The detective will find out tell them cnt talk.”

3 Replies to “Cali-Iraqi woman’s death looking less like a hate crime and more like something more familiar.”