What a shame that no one thought to honour kill this terrorist while he disguised himself as a Muslim women. I mean, if he wants the advantages of anonymity in Islamic society then shouldn’t he also have the risks?

A British terror suspect linked to 7/7 bombs widow Samantha Lewthwaite was arrested in Kenya while dressed as a woman, a court heard.

Jermaine Grant, 29, from London, had allegedly disguised himself by wearing a Muslim burqa when he was held in 2008 as he travelled on a bus in northern Kenya.

A court in Nairobi heard the suspected bomb plotter was accused of being part of a gang which attacked a police station on May 31 2008 in the town of Wajir. 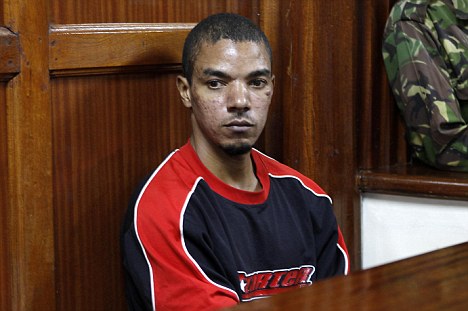 Capture: Jermaine Grant, 29, from London, had allegedly disguised himself by wearing a Muslim burqa when he was held in 2008 as he travelled on a bus in northern Kenya

Today police sergeant Kulmia Hamud told how he arrested Grant after fellow bus passengers informed officers there was a man on board dressed as a woman.

He said: ‘I closely looked at his head and realized he was a man and not a woman.

‘I asked him to identify himself by showing his identity card but he could not respond since he didn’t speak or understand Swahili.’

The court heard Grant was unarmed when he was arrested on the bus just hours after the remote police camp was attacked in the northern town.

The British Muslim convert, who has been linked by police to a terror plot involving ‘White Widow’ Lewthwaite, was held alongside two other suspects.

The trio were suspected of violently attacking the police base to steal firearms and a vehicle.

The court heard Grant was held in custody following his arrest at the Dadajabula police camp in Wajir but escaped just hours later after suspected al-Shabaab militants attacked the building. 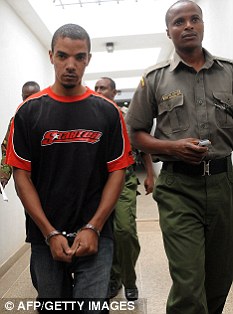 Grant, 29, arrives at the Nairobi high court for his trial on charges of possessing explosive materials

The London-born suspect disappeared and was not seen again by police until December 20 last year, when he was arrested as part of a separate probe in the port city of Mombasa.

The court heard this morning that he had been charged with violent robbery and escaping justice over the 2008 incident.

Grant, who has already been sentenced to a year in prison for entering Kenya illegally, was led into the Nairobi courtroom in handcuffs.

He then appeared relaxed as he stood in the dock, wearing a red and blue striped T-shirt.

Speaking afterwards his lawyer Mbugua Mureithi said he denied the charges against him.