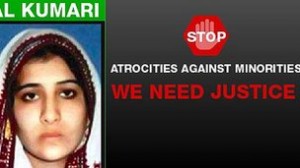 Member of the National Assembly (MNA) Mian Mitto has forced 20 Hindu girls in in the province of Sindh to convert to Islam and marry Muslim men, according to the Pakistan Sikh Youth Council (PSYC).

Speaking at a press conference on Thursday PSYC chairman Radesh Singh Tony alleged that “More than 80 Hindu families have already migrated to India” because of the actions of MNA Mitto, “who has tried to compel many Hindu girls to covert them to Islam.”