Police were pelted with bricks and other missiles last night as hundreds of youths went on the rampage.

Takeaways were targeted in an evening of disorder understood to be linked to the on-going trial of a suspected grooming gang at Liverpool Crown Court.

A mob of around 200 youths congregated in the centre of the Heywood area of Rochdale, Greater Manchester, last night as trouble began.

One shop-owner told how he was abused by a group of youths , who called him a ‘dirty b*stard’. 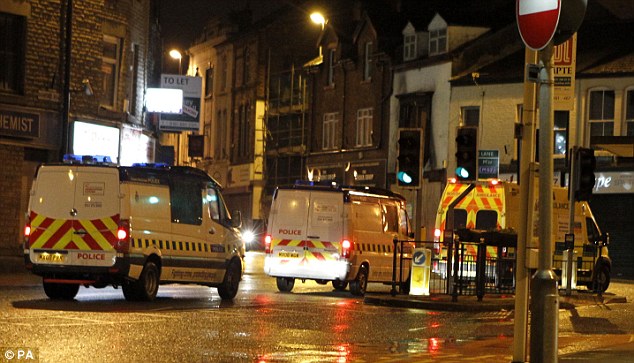 Out in force: Greater Manchester Police were forced to deploy riot vans as the angry mob swelled to around 200 youths 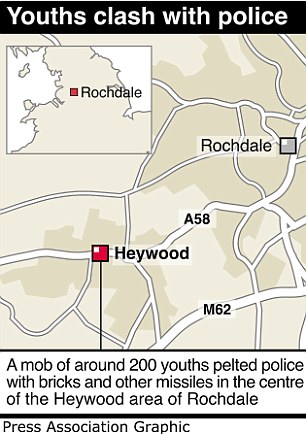 A police officer suffered bruising to his legs and arms in the disturbances.

A car belonging to a member of the public and three police vehicles were also damaged.

Greater Manchester Police has confirmed more police will be out on patrol today amid fears of a second night of violence.

A 35-year-old man was arrested on suspicion of a public order offence and police assault and a 14-year-old boy was arrested for causing danger to a public highway.

The area became swamped with police in riot vans and the mob of young people was eventually dispersed by officers at about 11pm.

Zeeshan Khokhar, 23, owner of Bits n Pizza, a take-away on Market Street, said he was verbally abused, though his shop was not damaged.

Mr Khokhar said ‘white friends’ came to his shop to protect him as trouble began brewing.