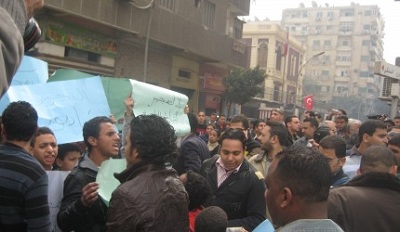 (AINA) — Egyptian Security forces yesterday prevented a rally of hundreds of Copts and activists from various political groups from reaching the Egyptian Parliament. The rally was staged to condemn the eviction of 8 Coptic families from their homes in El-Ameriya in Alexandria, on January 27 (AINA 2-9-2012).

The protestors were angry at the Parliament Speaker, who ignored last week an urgent request submitted by elected Coptic member of Parliament Dr. Emad Gad, to discuss this issue. The protesters said they wanted to meet with members of parliament, the Muslim Brotherhood and the Salafi parties to inform them of their condemnation of the events in El-Ameriya. Two Copts, Hani Ramsis and John Talaat, were chosen as delegates to the Parliament Speaker to deliver the message “No to reconciliation sittings or to the displacement of the Copts in El-Ameriya.”