Our English correspondent Seneca III attended the English Defence League demonstration in Leicester yesterday, but from behind enemy lines — that is, from the side of the Unite Against Fascism counter-demonstration. From his incognito he was able to observe the UAF reveal their true colors, but only where the MSM cameras were not able to record their activities.

Below is his photo-report on his experiences.

My Yesterday in Leicester
by Seneca III

Last year, almost to the day, I attended and reported upon the EDL demonstration in Luton. This year I decided to have a day out in Leicester and, in the interests of fairness, I chose not to march with the EDL this time but to report from a different perspective — that of the general public and, if possible, from within or from close to the UAF. It was an interesting day, as the following photo-essay may illustrate.

As usual there was a substantial police presence everywhere, all of whom were pleasant, polite and helpful when asked what was happening. I was able to identify large contingents from Lincolnshire and Humberside as well as the West Midlands, within whose beat Leicester lies. 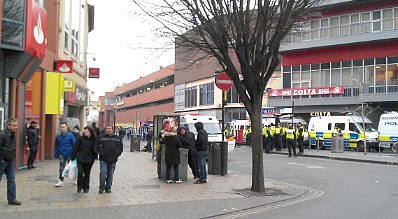 By about 1115hrs roughly fifty to seventy five UAF had gathered close to the Clock Tower, and I eased in for closer look, only to be immediately accosted by a rather scruffy young man with an armful of Socialist Workers Party (oxymoron, or what?) leaflets. I declined a leaflet but asked him what was going on and why he was there. I would like to be able to report that I received a coherent and rational answer to either or both questions but I am afraid this is not the case as with his rather limited vocabulary of roughly half a dozen words — “thugs, EDL, racist, innit, racism, innit” — he was little more then a perambulating oxymoron himself.