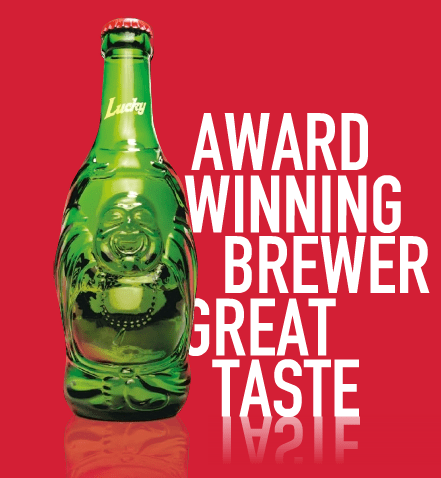 Lucky beer. Yes, the bottle is in the shape of the Buddha. No, so far there have been no petitions, riots, murders, etc. in response.

Do you wish the West was just a little more like Victorian Britain? No? Then you might be surprised to know that some people do. The Atheist, Secularist & Humanist Society of the University College London is currently under the spotlight for posting an image from the online “Jesus and Mo” cartoon on its Facebook page. The ASHS uses the page to promote social events that usually involving drinking — they’re students. The image depicts Jesus and Islam’s prophet Mohammed in a bar with a pint of Guinness beer each.

No prizes for guessing that the college union has received “complaints” and that the society is being pressured to remove the image.

Something needs to be pointed out here. I understand that Muslims are upset, but how many of them are going to be checking the Atheist, Secularist & Humanist Society’s Facebook page for the next boozing session? Err… well… none. That’s right, none of the offended actually need to be offended. It’s a lifestyle choice.

Anyway, Muslims in Leamington, a northern British town 131 miles from London, have added their names to a petition that demands the ASHS take down a cartoon. The ASHA has received an… read more (and WARNING: see the offending image).

3 Replies to “UK Muslims petition against “Jesus and Mo” cartoon”