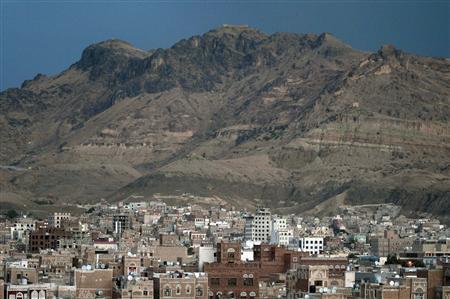 (Reuters) – Al Qaeda militants have seized a small town southeast of Yemen’s capital Sanaa Sunday in another setback to efforts to restore order after President Ali Abdullah Saleh formally handed over power following almost a year of mass protests against his rule.

A police source and witnesses said the militants met little resistance from a small police force when they entered the town of Radda in al-Baydah province, 170 km (105 miles) from Sanaa, Saturday night, seizing an ancient citadel and mosque.

The capture of Radda expanded al Qaeda control outside the southern province of Abyan, where they have taken over several towns since the uprising against Saleh began.

Saleh signed a deal brokered by Yemen’s Gulf neighbors in November under which he shifted formal power to his deputy. But he has not yet left the country and continues to wield a great deal of power through relatives’ control of security forces, raising concern about the integrity of the deal.

“I call again on President Saleh to abide by the terms of the agreement,” U.N. Secretary General Ban Ki-Moon said in Beirut during a Middle East visit, noting that a U.N. mediator had been “at the heart of negotiations” with Saleh.

The anti-Saleh unrest has emboldened groups linked to al Qaeda’s Yemen-based regional wing, which the United States has called the most dangerous branch of the militant network.

The United States and Saudi Arabia, the world’s No. 1 oil exporter, are keen for the Gulf-backed power transfer deal to work, fearing that a vacuum in Yemen may give al Qaeda space to thrive near key oil and cargo shipping lanes in the Red Sea.

Underscoring the continued lawlessness in Yemen, a Norwegian working for the United Nations was kidnapped in Sanaa at the weekend, Norway’s foreign ministry said.

A tribal source said the Norwegian was abducted by tribesmen from oil-producing Maarib province demanding the release of a suspect accused of killing two members of the security forces.

Residents in Radda, which has a population of around 60,000, said the militants who took over the town were led by Tareq al-Dahab, who had been handed over by Syria to Yemen recently after being detained while trying to slip into Iraq.

Dahab is a brother-in-law of a U.S.-born, Yemen-based Muslim cleric linked to al Qaeda killed in an air strike last year.

But Abdo al-Janadi, a spokesman for Saleh’s General People’s Congress (GPC), rejected the charges and he in turn accused opposition elements involved in the power transfer deal of collusion with the militants.

“There is a link between the Islah and al Qaeda,” he said, referring to the Islamist al-Islah party, a member of the bloc.

The United States and Saudi Arabia backed Saleh through much of his autocratic 33-year rule, fearing that any vacuum would be exploited by al Qaeda in the Arabian Peninsula, or AQAP, based in Yemen. As street protests intensified against Saleh, however, they endorsed the Gulf-brokered deal for Saleh to step down.

Under the plan, the opposition and the GPC shared out cabinet posts between them, forming a unity government to steer the country toward presidential elections in February.

But little headway toward reinstating order on the ground has been made since then.

In Sanaa Saturday, a 48-hour deadline given to armed opponents and supporters of Saleh to withdraw after months of street fighting passed but there was little change in the armed face-off, according to residents.

Fighting against Islamist militants in the south has continued, forcing about 97,000 people to flee. More than 300,000 others have been displaced by tribal rebellion in north Yemen, according to U.N. estimates.

A local official said the bodies of two soldiers were found in an area some 80 km (50 miles) east of the Abyan provincial capital Zinjibar Sunday. He said he believed the two had been abducted by al Qaeda to the area where they were killed.