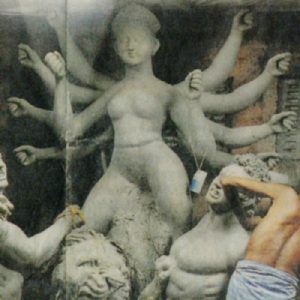 A close-up of the naked statue image of the Hindu goddess Durga published by the Toronto Star in August 2011.

We hear a lot about the importance of respecting different faiths these days. Remember how few newspapers carried the drawings of Mohammed after Muslims rioted across the globe, burned down a Swedish embassy and murdered a Christian nun? That was because of respect, remember? The Left-wing Toronto Star was one of those newspapers sensitive to religion. But, just one.

In 2003, the Star published a photograph of a statue of Durga, the Hindu goddess that provoked demonstrations by 300 Hindus. Statues of Durga are always elaborately clothed. The Toronto Star‘s photograph upset devout Hindus because she was shown naked, in the workshop of a sculptor.

The demonstrators gave the newspaper a letter that complained about its”entirely inaccurate and misleading depiction of the goddess.” A number of Sikhs also joined the demonstration in support of the Hindus who chanted “give respect, get respect” and “we want an apology.”

Fast forward to 2011. In a move that was certain to upset the Hindu community of Canada, in August and September the same newspaper again published photos of the goddess Durga naked.

Through its lawyers the Canadian Hindu Advocacy (CHA) has filed a human rights claim against the Toronto Star. The CHA calls the photographs a violation of the sanctity of the Hindu goddess. The organization has also set up a petition to “penalize” the Toronto Star.

One comment on the petition page complains that “The Toronto Star would never publish a derogatory picture of Muhammad, but here they cheapen Hindu Goddess Durga, sexualizing her. Haroon Siddiqui and The Toronto Star are a bunch of hypocrites who are anti-Hindu.” Another commenter calls the newspaper “anti-Hindu.”

You can read the comments and sign the petition here.