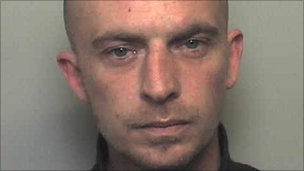 A former soldier has been sentenced to 70 days in prison for setting fire to a copy of Muslim holy book the Koran in the centre of Carlisle.

Andrew Ryan had previously admitted religiously aggravated harassment and theft of a Koran from a library.

The 32-year-old, of Summerhill, said he had been “shocked” watching a Muslim burning a poppy on Remembrance Day.

Shoppers and schoolchildren witnessed the burning, outside the old Town Hall, on 19 January.

‘My country’He said: “It was pre-planned by you as you stole the book deliberately.

“You went out to cause maximum publicity and to cause distress.”

Ryan struggled with security guards in court after the sentence was passed.

While being handcuffed he shouted: “What about my country? What about burning poppies?”

About 10 people were in court to support Ryan, and as they left the court they shouted “do you call this justice?”.

After sentencing, Insp Paul Marshall, of Cumbria Police, said: “This incident was highly unusual for Cumbria as we have such low levels of hate crime in the county.”

11 Replies to “Ex-soldier jailed for burning Koran in Carlisle”