The BBC neglects to give the name of the arrested man, as well as mention it was a Halal butcher. Given what appears to be BBC policy, we can reasonably interpolate the religion of the offender. 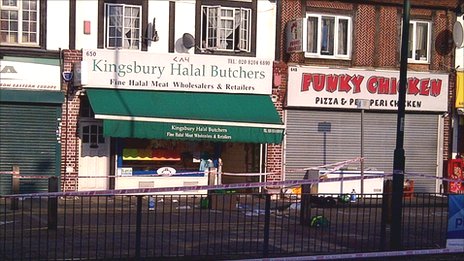 The suspect grabbed a knife from a butcher’s shop and attacked officers, eyewitnesses say

Four officers have been injured after being called to a disturbance in Kingsbury in north-west London.

Three of the officers were stabbed and the fourth suffered a hand injury after they tried to speak to a man in Kingsbury Road on Saturday morning.

Eyewitnesses said a man was chased before he took a knife from a butcher’s and attacked the officers. Two of them are said to be seriously injured.

A 32-year-old man was arrested on suspicion of attempted murder.

Metropolitan Police Comissioner Bernard Hogan-Howe said he was concerned for the four officers, all of whom were treated in hospital.

He added that two of them were in a serious condition.

An eyewitness said there were between five and 10 officers at the scene in Kingsbury Road.

Another witness, shopkeeper Girish Modha said: “A man was shouting at police in a small alleyway next to a hairdresser’s shop which neighbours mine.

“He grabbed a piece of fluorescent tubing and brandished it at police.

“He then ran down Kingsbury Road, going into a cash-and-carry shop. At one point I think he threw a brick and smashed a police car window.

“He then ran round the roundabout and carried on towards the Tube station.

“He went into a butcher’s, got a knife and that’s when the stabbing took place.”

A hairdressers, Mr Modha’s sweet shop and a chemist were cordoned off.

The officers are believed to have been attacked at the Kingsbury Halal Butchers, which is located on a busy shopping street opposite Kingsbury Tube station.

Ketan Vyas, the manager of a cash-and-carry store, VB and Sons, said a man aged in his 30s or 40s had burst into the shop chased by police.

Mr Vyas said: “He picked up some cans of beans and threw them at the police and then carried on running out of the store and down the road.

“There were a lot of police after him. He was only in here for a few seconds.”

Describing the aftermath of the incident a worker at a Carphone Warehouse shop opposite Kingsbury Halal Butchers said: “I saw about eight police officers on top of a man.

“Ambulances arrived to take away the injured policemen and the man was also taken away.”

A spokeswoman for London Ambulance Service said they took five patients to hospital after being called to the scene at 08:50 GMT.

She said: “We sent two single responders in cars, four ambulance crews and a duty officer.

“We treated five patients, they were all conscious and breathing, and they were taken to hospital.”

Four of the injured people were officers, but the identity of the fifth person who was taken to hospital is yet unknown.

Kingsbury Circle has been closed in all directions following the incident and five bus routes have been diverted.