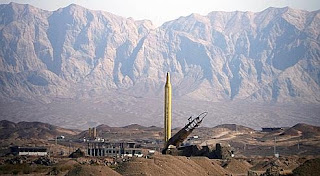 Israel Television has just reported that Hassan Moghadam, who was responsible for Iran’s missile program, was killed in Saturday’s blast outside Tehran. DEBKA reported this late on Saturday night. Here’s their story.

Brig. Hassan Moghadam, head of Revolutionary Guards (IRGC) missile development and sections of its nuclear program, was killed in one of the two consecutive explosions that hit two IRGC bases 46 kilometers west of Tehran Saturday, Nov. 12. The official fatality figure is 32. Fourteen hours after explosions blasts could still be heard and fires raged. debkafile’s exclusive sources report the bases are located in Malard, a town in the Shahryar district. The Moadarres facility was the first to be hit, while the second and bigger blast occurred at Amir-al-Mo’menin.

Their force was such that the Iranian Red Crescent rushed 45 ambulances to the two facilities plus 23 buses converted to first-aid vehicles and a helicopter to evacuate the critically injured.

However, only six rescue workers were given access to the Moadarres base and none were permitted to enter Amir-al-Mo’menin because of the facility’s sensitivity.

Fourteen hours after the explosions, the blasts continued and fires raged. Surrounding streets were closed and reporters kept away from the scene.

Our sources report increasing evidence that the first explosion was caused by a failed effort to mount a nuclear warhead on a Shahab-3 intermediate-range missile.

The son of the former commander of Iran’s Revolutionary Guards was found dead on Sunday in a hotel in Dubai.