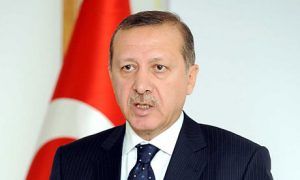 (The government of Recep Tayyip Erdogan, above, has distanced itself from the controversial court ruling).

Human rights groups have reacted with outrage after a Turkish appeals court reduced prison sentences for 26 men convicted of having sex with a 13-year-old girl, because the victim had given “consent”.

In a judgment this week, the court ruled that the sentence was based on the old Turkish penal code, under which rape of a minor could be punished with a minimum prison sentence of 10 years – unless the child consented.

Two women accused of having sold the girl – known only as NÇ – for sex have each been sentenced to nine years in prison, for leading “immoral lives”, but the 26 men, who include teachers, civil servants and a village elder, were given sentences ranging from one to six years.

Activists protesting outside Istanbul’s palace of justice on Friday called for the decision to be overturned.

“Is it necessary to discuss consent when 26 men rape a 13-year-old girl?” asked Nilgün Yurdalan, a women’s rights activist of the Istanbul Feminist Collective.

“We think that the government itself has committed a serious crime. This does not concern only the five judges, but the laws of this country, the mentality of the government and their view of women,” she said.