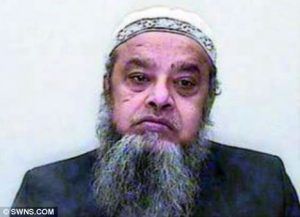 A ‘scheming’ paedophile has been jailed for two years after abusing young girls while teaching at a mosque as an – IMAM.

Ebrahim Yusuf Kazi was told by a judge he would have been jailed for longer – but the law prevented it.

The 67-year-old cleric sexually assaulted three victims – all aged under 11 – during class as he taught groups of youngsters alone inside the mosque.

He would invite the girls to read a passage from a book in front of the other children – before groping and touching their genitals under the desk.

He also locked himself in a toilet cubicle with one of the girls, removed her clothes before he touched and licked her body.

Kazi’s campaign of abuse only surfaced 27 years after his horrific sex crimes, when the brave victims finally decided to speak out and confront him in court.

The women wept as they saw Kazi jailed for two years after being convicted on five counts of sexual assault at Swindon Crown Court, Wiltshire, yesterday.

Judge Euaun Ambrose said: ‘You were in a position of very considerable status, trust and authority.

‘It was a position of total power and respect – not only within the mosque but also within the local Muslim community.
Read more: http://www.dailymail.co.uk/news/article-2057017/Paedophile-imam-confronted-grown-girls-abused-Swindon-mosque.html#ixzz1ce3oO8rF

4 Replies to “Paedophile imam jailed after girls he abused 27 years ago come forward to nail him.”